It’s time for APS to stop meddling in the elections of its regulators on the Arizona Corporation Commission. 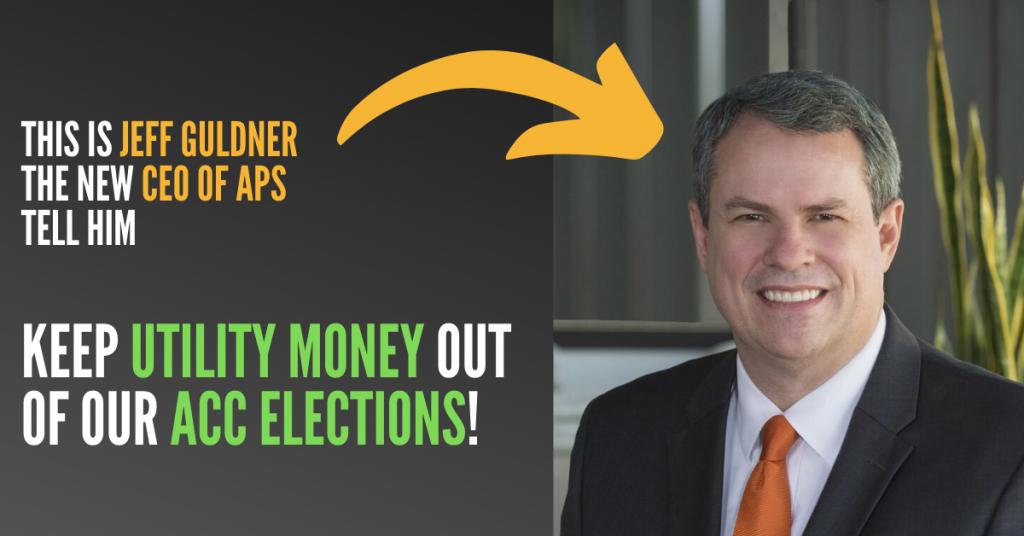 The Arizona Corporation Commission (ACC) is elected to make sure APS acts its customers’ best interests. Yet, APS has funneled millions of dollars to get its preferred candidates elected. This has to stop.

APS is about to bring on a new CEO, Jeff Guldner. Mr. Guldner has an opportunity to leave behind the company’s outrageous practice of stacking the ACC against its customers.

The ACC sets how much monopoly utilities like APS can charge customers. APS has spent tens of millions of dollars on ACC campaigns over the past several years. In 2017, the Commission allowed the company to raise our utility rates while ending net metering for new solar customers. As a result, APS made a profit of more than half a billion dollars last year. Those who invested in solar saw diminished returns.

Fortunately, some commissioners want APS to end its practice of influencing these elections. At a recent hearing, ACC Chairman Bob Burns asked Mr. Guldner if he would stop APS political spending in future commission races. Mr. Guldner declined to make the commitment.

It’s time for APS to end the practice of meddling in Arizona Corporation Commission elections.

As incoming CEO of Arizona’s largest utility company, you have the opportunity to stop the corruption that inherently comes with spending millions of dollars to elect your company’s regulators.

There are many reasons the public has lost their trust in APS. One way to start to rebuild that trust is to stop the company’s political spending in elections for Arizona Corporation Commission.

Please make this commitment as soon as possible.