What is community solar?

Hundreds of D.C. homeowners have put solar on their homes. But what about those who live in apartment buildings or whose roofs can’t support solar panels? Community solar makes it possible for everyone to go solar.

With community solar, you can purchase or lease a “share” in a community solar project or start a project with your neighbors. Every month, you receive a credit on your electricity bill for the energy produced by your share. (Prefer to watch a video? Check out Episode 1, Community Solar Basics: Consumers)

Where can community solar projects be located?

A community solar project can be located on the rooftop of a building (e.g., church, apartment, or warehouse) or on a piece of land in the District. There are no restrictions on the types of buildings that can host community solar projects. But, they must be physically located in the grid supplying the city. This means D.C. and a few edges around the city in Maryland.

Who owns the projects?

Community solar projects can be structured several different ways. Some examples include:

The video below describes a recent community solar project in which the Washington, D.C. office of the global law firm Nixon Peabody installed a solar system on its roof which benefits the residents of an affordable housing complex elsewhere in the District.

How is electricity from community solar credited on my bill?

Setting up a community solar project 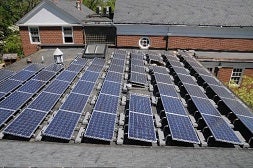 What is the value of electricity generated from community solar?

We successfully led D.C. solar supporters in the fight to bring the rate for community solar in line with the rate solar homeowners receive. In 2016, the D.C. Council passed legislation to ameliorate this problem and the full credit rate was restored by D.C. PSC rule-making in January 2017.

History of community solar in D.C.

It took many years for D.C.’s solar activists to get a fair community solar program built in the District. 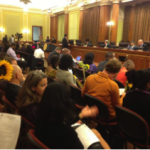 Summer 2011 to October 2013: We worked with a broad coalition of community groups to pass legislation to make community solar possible. 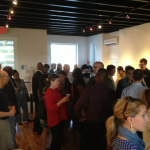 September 2014 to April 2015: The PSC conducts a proceeding to formalize the rules for community solar (see filings above). 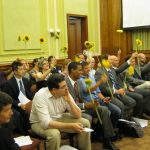 April 2015: The PSC issued its final ruling for the Community Renewables Energy Act of 2013. Unfortunately, the commission ruled District residents who use community net metering to gain access to solar would not be refunded for the full value of their solar production. Instead, they would only receive a portion of the full net metering credit for solar. They would receive the full rate minus taxes, fees, distribution and transmission rates. This created a “second tier” of solar subscribers – those who own homes and can put solar on their roof versus everyone else who rents, lives in high-rise buildings, or has a shaded roof. CREA was passed in order to serve the latter, but the PSC’s proposed rule undercut its original purpose by reducing the solar credit earned by the people who needed it the most.

I really liked the idea of making money off something that also helped the planet. Mark, Nicole & Nathaniel – Washington, D.C. Went solar with the ...
Read more