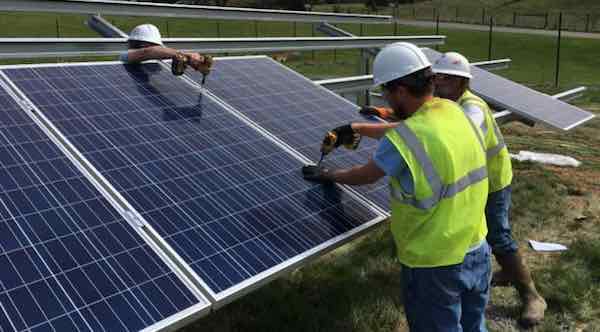 “The project started because we saw a lot of interest in solar,” said Mike Keyser BARC’s CEO and General Manager.

Keyser said BARC had a lot of members who wanted to go solar, but were unable to do so. They may have had roof or shading issues with their home, or were unwilling or unable to make the financial investment into solar. The BARC project was designed to allow members to go solar by removing these barriers.

BARC members have responded favorably. The project is already fully subscribed. More than 200 homes, and several small businesses, have signed up for the project. Enrollees can offset up to 25% of their usage with energy from the system. This cap is in place to allow more customers to sign up for the program, which now has a waiting list.

Homeowners who receive electricity from the farm will pay a 2¢ per kilowatt premium on the electricity. This rate is locked in for 20 years. Keyser expects subscribers to the solar farm should see a net positive return in 5 – 10 years as the price of their electricity that doesn’t come from solar continues to rise.

Subscribers who move within BARC’s service territory can take their solar with them. If a subscriber moves out of BARC’s territory, the subscriber forfeits participation in the program and that space is opened for next person on the waiting list.

BARC has built in an expansion fund as part of the solar project. Keyser said the particular site where the project is located could add another megawatt of solar if there is enough interest in the community. This may also allow BARC to raise the individual solar cap.

“One cool aspect is that related to the project is that they really want this to be a place for children to learn,” Keyser said.

BARC plans on building an on-site solar learning center where kids can learn about solar first hand. It will include a test panel and real-time output, as well as other educational tools to provide an immersive experience.