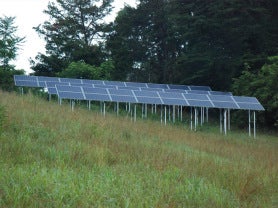 The 24-member Central Virginia Solar Co-op has issued a request for proposals (RFP) from area solar installers. The group members created the co-op to save money and make going solar easier, while building a network of solar supporters. Natural pHuel, Farmville Area Kiwanis, Holistic Moms Network Southside Virginia chapter, Rochette’s Florist, and VA SUN are the co-op sponsors. The group also announced it will host an information meeting at 6:30 p.m. on Tuesday, August 30 at the Farmville Public Library to educate the community about solar and the co-op process.

Joining the co-op is not a commitment to purchase panels. Co-op members will select a single company to complete all of the installations. They will then have the option to purchase panels individually based on the installer’s group rate. By going solar as a group and choosing a single installer, each participant generally saves up to 20% off the cost of their system.