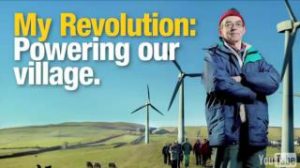 Community ownership may provide the solution for increasing resistance to wind power in the United States.

Wind power has expanded rapidly in recent years, but the new wind farms have a common characteristic: absentee ownership. These large wind farms promise a broad expansion of clean energy production, but not a commensurate expansion in local economic benefits. True, every wind power project will create some jobs and ripple effects in the local economy, but with absentee ownership, most project benefits will leave the community (whereas locally owned projects have significantly higher rewards).

Without a say or stake in the turbines remaking their local skyline, communities have raised red flags. The result is more restrictive wind siting policies and opposition to new high-voltage transmission lines that may carry wind power from remote areas to major cities.

Some wind developers have learned that gaining local acceptance means rewarding not just the landowners who host project turbines, but neighbors who will also be affected by the turbines’ proximity. In the United Kingdom, state policy is requiring wind farms to pay into community funds (perhaps inappropriately, as a tool to offset severe budget cuts). But this policy has two drawbacks. For one, it only buys off the opposition; it doesn’t transform them into wind advocates. Second, it fails to take advantage of a community’s capital and the interest of residents in owning a stake in local wind power, rather than simply observing.

In local communities, there’s been little to no opposition to wind projects,” said Eric Lantz, a wind policy analyst at the Renewable Energy Laboratory and a coauthor of the study. “There’s more pride taken when you’re able to participate with an ownership stake.”

Several studies reinforce the idea that a local ownership stake is key to acceptance of wind projects.

Community ownership not only eliminates most local opposition, but makes locals into stakeholders in the success of wind power. A new 25 megawatt wind project in southwestern Minnesota will feature significant community ownership. Just listen to the heartfelt pride in wind power from these members of a wind power cooperative in the United Kingdom:

Community wind projects are also more likely to reduce demand for long-distance transmission, because gaining local acceptance means wind farms can be built closer to cities and because communities lack the capital to build the largest-scale wind farms. This is a key issue, since there’s yet to be a community-owned transmission line.

While community wind could save the wind industry, it won’t take root without some better rules. Community wind projects still require financial acrobatics, largely because the federal incentive for wind power (the Production Tax Credit) can only effectively be used by big banks and investment firms. And utilities tend to favor a few negotiations with large wind projects rather than many negotiations with smaller projects to meet their renewable energy obligations. Laws like Minnesota’s Community-Based Energy Development statute or CLEAN contracts can pave the way for more community-based wind projects.

Wind power is a key element of transforming our electricity system to clean energy and to combatting climate change. But its future may hinge on the willingness of the wind industry to embrace community ownership.

John Farrell is an Institute for Local Self-Reliance (ILSR) senior researcher specializing in energy policy developments that best expand the benefits of local ownership and dispersed generation of renewable energy. He has written extensively on the economies of scale of renewable energy, the benefits of decentralized energy generation, and the policies and rules that support locally owned and distributed generation of renewable energy. His seminal work – Energy Self-Reliant States gave a vision of states meeting their energy needs with in-state sun and wind and spawned a rapidly expanding distributed generation resource: http://energyselfreliantstates.org. He also wrote one of the leading summaries of feed-in tariffs for the U.S. electricity policy market titled, Feed-in Tariffs in America: Driving the Economy with Renewable Energy Policy that Works.