Legislation to fix community solar was set to be introduced and voted upon on Tuesday. The D.C. Public Service Commission (PSC) sent a letter to the Council on Monday afternoon. The letter expressed the PSC’s concern about tax implications of the legislation. As a result, the Council’s Budget staffer needed some additional time to review. So, the Council decided to pull the vote from the meeting agenda. Fortunately, we don’t foresee this being an issue, as tax implications were already discussed and addressed when the original community solar bill passed unanimously through the Council in 2013.

Though the legislation was withdrawn Tuesday, we plan to put it forward at the next legislative meeting on July 14th.

We’ve confirmed that the following DC Councilmembers will co-sponsor the bill:

We are working to continue community solar’s momentum and address the PSC’s concerns. Thank you for your help. Your support is critical to ensuring all D.C. residents can benefit from solar energy. 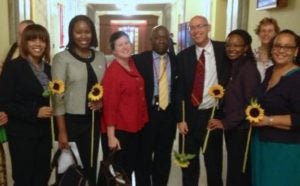