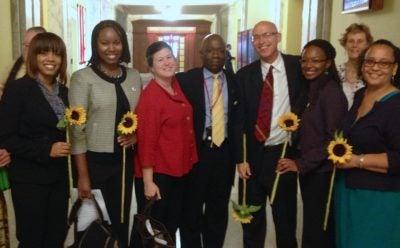 Last month, the Public Service Commission released its Notice Of Final Rulemaking for the Community Renewables Energy Act of 2013 (CREA). This law, which passed unanimously, was intended to expand solar access to all citizens, regardless of where they live or how much money they make. The law required the PSC to make the rules for the District community solar program. Pepco has been given 45 days to draft a procedure for implementation of the law.

Community Solar is the policy that allows D.C. residents to buy into a solar facility somewhere else in the District, and reduce their Pepco bill by the amount of energy produced by their share of the solar facility. It is perfect for people who rent, live in multi-unit buildings, or don’t have a good roof for solar. In other words, most of us.

This will make it extremely difficult for anyone who rents, lives in multi-unit buildings, or has an unsuitable roof to enjoy the benefits of solar energy. That’s more than 80% of D.C. residents. We have heard from numerous sources that few community solar projects will go forward if these rules remain in place.

The PSC’s rules contradict the clear intent of D.C. Council when it passed the law in 2013. Recently, ten councilmembers signed a letter to the PSC urging them to:

Their letter goes on to say that:

DC SUN is working toward an equitable solution to this problem. If you have interest in helping us ensure that all D.C. residents have access to the benefits of solar energy, contact us at: [email protected].