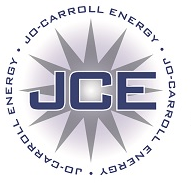 Jo-Carroll Energy is a not-for-profit distribution cooperative with more than 25,000 electric and gas accounts in four northwest Illinois counties. It also represents a recent example of an energy cooperative branching out into solar power at the request of its members. Located near the cooperative’s headquarters, the South View Solar Farm was commissioned in late December, 2014, and serves the entire Jo-Carroll Energy Service Territory. The National Renewables Cooperative Organization (NRCO) is the project manager of the farm. It is a nonprofit that promotes and facilitates renewable energy resources. Eagle Point Solar of Dubuque, IA, was contracted to build the farm, with Vincent Earthmoving of Elizabeth and Hulscher Fencing of Galena, IL, as subcontractors.

The farm is situated on a three-quarters-of-an-acre area behind the east campus of the headquarters. According to Michael Hastings, CEO of Jo-Carroll Energy, “the site worked best for our needs,” as it was on co-op property and on a south-facing slope. Bringing NRCO into this project was, Hastings said, a no-brainer: “We work closely with them and it was an easy decision to partner with them to help us with the project.”

Jo-Carroll offers its members a subscription-based plan for South View Solar Farm, with a 20-year agreement. After 20 years, subscribers can continue to receive credits. Members do not actually purchase panels from the co-op, but only purchase the output from the panels. Those who receive their electricity from the co-op can purchase subscriptions for capacity credits, and each subscriber will receive a monthly bill credit for his or her panel’s output. The cooperative charges a one-time subscription price of $890 per each 275-watt panel. This price covers the lifetime operations and maintenance of the system as well as other costs it may incur.

The cost of the panels to the subscribers (from the 125.4 kw array) is $3.24/watt. The project, not the subscriber, utilizes the 30 percent federal tax credit. The project does not receive renewable energy credits at this time. Thus, the project isn’t exactly a bargain for the participants compared to the cost of solar elsewhere, but it appears to be very convenient and accessible.

Hastings said subscriptions are sized to the member’s electric load. This means, ideally, the member would never buy more than what is required to offset electric usage at home. “The program was not designed for members to buy more electric output from the community solar project than they need, and then have to sell excess electricity back to the co-op,” Hastings said. The estimated average return for members is $48-50 per panel per year in credits, based on Jo-Carroll’s own projection of the solar output from the project, and participating members can expect to break even on their investment over the 20-year period.

Participation in South View Solar Farm by Jo-Carroll members is voluntary. Hastings mentioned several reasons why a Jo-Carroll member would not want to participate. These include the large upfront costs of purchasing the subscriptions (though financing is available from Jo-Carroll) and what some members may regard as the long period necessary for a subscriber to break even.

If a participant decides to move, that person has several options. If the move is within Jo-Carroll’s service territory, the member can simply transfer ownership to the new location. However, if the participant is moving outside the territory, or doesn’t want to transfer his or her credits, there are two options: a) the member may transfer his or her credits to another member’s account, or b) the member may sell credits back to the co-op at a discounted rate.

The program could be very easily replicated, according to Hastings. “Several co-ops in Wisconsin and Iowa have already done this or are in the process of doing this,” Hastings said. Jo-Carroll will also build more solar farms if there is adequate interest from its members.