As part of our NEW series of profiles on CPN members, Greg Bloom spoke with Ruston Seaman of New Vision Renewable Energy about the organization’s use of a time bank to help rural families go solar.

Renewable energy is far from common in West Virginia. But in the heart of coal country, low-income residents often struggle with utility bills that (at about 10 cents / kwh) can sometimes add up to be almost as costly as rent itself. One church in Philippi, WV has recently mobilized its community to meet its own need for alternatives, through a radical experiment in grassroots greening. 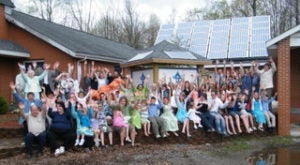 “God provided minerals, water, wind, and sunshine all to be used in a healthy balance,” says Ruston Seaman, pastor of Philippi’s People’s Chapel Church, and co-founder of New Vision Renewable Energy. Through New Vision, Ruston and his cohort are applying that same holistic sensibility to the development of green energy: by rallying the many human resources in their community, they’re building and installing their own solar arrays.

To get this done, they just needed a bit of engineering ingenuity, a relatively modest pool of seed funding — and a new currency specially designed for the task.

West Virginia has relatively weak tax incentives for renewable energy; furthermore, most of the families in the People’s Chapel community don’t carry the tax liability that typically makes such incentives incentivizing.

“On some level, the tax rebate stuff is misguided,” says Seaman. “It’s giving people with resources another shot in the arm, but if you’re a non-profit or a low-income family, they’re not valuable to you.” Despite the high cost of electricity from the grid, solar installations would not normally be economically viable for most residents here.

But one resident of Philippi went ahead and did it himself. John Prusa is a local engineer (described locally as a ‘benevolent mad scientist’) who designed and built his own home’s solar power array, and then shared his designs with neighbors and helped them develop their own. When Seaman happened to meet Prusa and hear about his now-solarized block, their vision for New Vision Renewable Energy formed immediately.

You might call Seaman something of a mad scientist himself. In 2008, he started a Time Bank through the People’s Chapel Church. Inspired by Edgar Cahn, a legendary civil rights litigator and founder of Time Banks USA, Seaman hoped to use this system of mutual credit to generate social capital in their community as it struggled through the recession.

Through a Time Bank, members earn credit through work that they perform for each other. Work is considered to be anything that meets a neighbor’s need, and one hour of work equals one credit, so everyone’s hour is equally valuable. By facilitating co-production — the exchange of skills and assets through mutually-incentivized reciprocal relationships — a Time Bank can build community resilience in the face of a broken economy. 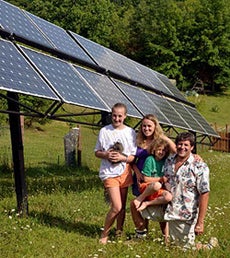 At its peak, the first Philippi Time Bank had 300 members — and the Church even opened an actual store in which people could exchange their time credits for goods. But this initial Time Bank project struggled under the limitations of its exchange-tracking software, a lack of projects that rallied people’s participation — and it was dependent upon the labor of a paid coordinator. When the funding for the coordinator petered out, so did the Time Bank.

When Seaman met Prusa and saw that this kind of homespun solar development was something that all Philippi residents could participate in and benefit from, a second incarnation of the Time Bank was born.

“With Prusa’s designs and guidance, we could teach ourselves how to assemble the arrays out of their component parts,” Seaman says. “That would bring down the cost of the materials, and the cost of the installation, to the point that it all becomes a viable investment for a low-income family.”

Leveraging money and time together

New Vision estimates that it takes about 99 hours of labor to develop a solar array for a home, with materials that cost in the range of six to eight thousand dollars. So New Vision functions simultaneously as a micro-financing organization and a Time Bank.

Any Philippi resident can become a member of the Time Bank — for the cost of either $10/year, or through an initial commitment of their time. New Vision hosts weekly meetings where participants can receive training on various aspects of solar mechanics and installation. When a home is ready to move forward with its project, everyone mobilizes in a kind of ‘barn-raising’ event over the course of a day: folks will gather, work, eat, work, and celebrate. All of it earns credit, handed out (usually by Seaman himself) as a specially-designed paper scrip.

Once a member has earned 99 hours of credits (through trainings, installation events, and related activities) they can schedule an installation for their own home.

New Vision has a central pool of funding (initially raised from foundations and corporate donors) that they use to purchase most of the materials. When a member goes forward with an installation, they negotiate a loan from New Vision; they can borrow 100% of the cost, in which case New Vision recoups all of the resulting savings from the family’s utility bills, until the loan is paid off. (So far, their installations have yielded an annual savings of about $500, setting them on track to recoup costs in about twelve years.)

To get things moving, the group’s first project was on the Church itself, with fifteen people working two days over the course of a weekend. Since then, they’ve done eight more installations, at a cost of only about $6,000 each — several times lower than it would be if they’d paid third-party contractors to install out-of-the-box equipment.

Much of the labor involved comes naturally to the members, who are “generally pretty handy,” asserts Seaman. For instance, at New Vision’s weekly gatherings, members learn how to assemble components themselves — cutting the aluminum framing, affixing the glass and silicon, and soldering. There’s also plenty of site-based work to do, like clearing ground and building frames. And of course, nourishment itself takes work: “One of our members is a real good cook,” says Seaman, “so whenever there was a solar installation, she was making the meal for everyone” — that’s how she earns her credits.

In this way, a co-production approach leverages the community’s diverse array of skills and resources — most of which would go untapped by a market-based approach. The benefit of this is deeper than cost-savings: it facilitates community buy-in, and enables ground-up emergence of new ideas.

The Time Bank now has only 15 active families, but Seaman says that this is a good size. He describes this second iteration of the People’s Chapel Church Time Bank as informal, low-fi, and intimate. “In the first generation we had [the Time Banking process] all mapped out, but it left people concerned about their roles, and confused,” he explains. The simple paper scrip works better for their purposes than software. It also seems that the core focus on solar development doesn’t exclude other kinds of activities — if anything, it seems to stimulate more exchanges of all kinds. Credits are also given for activities like community time at the church, collecting and processing bio-diesel fuel, doing home energy audits, organizing fundraising bike rides.

Seaman hopes to see future expansion to new activities and more people, perhaps eventually re-opening the store to enable exchange of time credit for goods. (This growth will be a challenge, however; Seaman acknowledges that “if people were to start exchanging day-care and all that other stuff, [the Time Bank] might need more discipline.”)

At the same time, some participants are reportedly moving beyond the Time Bank framework — and are just helping each other as friends. In Seaman’s view, this is a positive outcome: it means the Time Bank has succeeded in building community, even if the people who have benefited from it ultimately phase out.

“Beyond the power that we’ve generated, the real joy of it is that we’ve done something for ourselves. That feeling is really powerful. We’re re-energizing our community.” 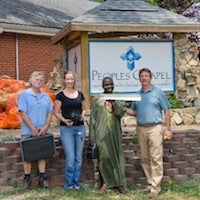 The sourcing has been the trickiest part of the project so far.

“Early on we were looking for the best deals we could get, and we had some trouble with cells that looked good on paper but just didn’t work in the air. Cheap materials that were penny-wise but pound-foolish. So we got burned that first cycle,” Seaman recalls, “and this whole challenge did make us grow up and be more mature.”

New Vision is still acquiring lots of ‘B-grade’ materials, which work fine but are discounted because of things like cosmetic blemishes. And they’re buying more materials from American manufacturer Solar World. Meanwhile, they encourage other likeminded community initiatives to request sample materials before making large purchases, to test out if equipment will work.

Seaman notes that some of their materials are top-shelf — like caulking: “We use high-quality, expensive marine-based caulking because you just don’t want leaks.” Every installation team also includes a skilled electrician.

New Vision encourages its members to undertake the permitting process themselves, though the organization can offer help to move the process along.

The New Vision Renewable Energy model is a promising example of a cooperative co-production initiative that can build resilient community infrastructure with relatively low levels of capital investment. But to the extent that they have been successful so far, several unique factors are at play.

“Cutting and pasting the model won’t quite work,” Seaman notes. “You should think about how things should work in your specific community before you start.”

For instance, New Vision benefits from a generally high level of technical skill among working class residents of Philippi. Perhaps more importantly, the community’s relatively strong social fabric helps the Time Bank succeed. “We know each other really well,” says Seaman. “We have a high level of trust. Other communities without that high level of trust may need more support and structure.”

They also have, in John Prusa, a solar engineer who has stepped up to make it possible. Seaman claims that for all Prusa’s time working on these projects, he’s received close to that much labor in return from community members who have helped him with home renovations, yard work, and especially collecting bio-diesel gas. But on a strictly financial bottom line, this probably wouldn’t hold up against the money he could have earned for that time in the market. Rather, Prusa participates for the benefit of giving back to his community. Community initiatives without a ‘benevolent mad scientist’ on board might need the involvement of paid engineers to make this kind of co-production a success.

Also unique to this community is Seaman himself. As pastor of the Church, he is a trusted community leader whose hands-on commitment may give the Time Bank more traction than even a full-time paid coordinator could.

Nevertheless, other solar initiatives may find here the makings of a valuable formula for their own success: a trusted champion, a committed expert, a medium for reciprocally-incentivized exchange, and a community invited to take action to meet its own needs.

See videos on New Vision’s Youtube channel. Visit their website here. You can join with Seaman, Prusa, and others developing DIY solar solutions, by becoming a New Vision member. Membership includes assistance with material sourcing, advice on solar panel assembly and community organizing, and the satisfaction of supporting this promising young movement.