As part of our NEW series of profiles on CPN members, I spoke with Claire Burnett of Trees, Water, and People (TWP) about their partnership with Lakota Solar Enterprises (LSE). LSE and TWP have teamed up to help Native American take advantage of renewable energy systems for space heating, as well as help jumpstart more native-owned businesses around the country. 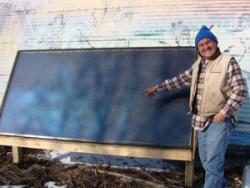 As a business, LSE’s central focus is on manufacturing and distributing solar air collectors and solar heating systems on the Pine Ridge Reservation. Historically, Native Americans, especially those from the Great Plains, were marginalized and forced to occupy tribal reservation lands that have some of the harshest landscapes in the United States. Temperatures can range from 110º F in the summer to -60º in the winter, with strong winds blowing throughout the winter months. For tribal families, particularly those living in poorly built homes, keeping homes adequately heated is often a significant challenge. Many use wood stoves, propane, kerosene, or electricity to provide heat, but these sources are prohibitively expensive, cause indoor air quality issues, and create pollution. 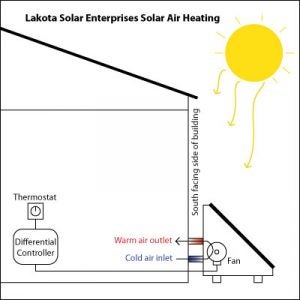 Solar air systems provide a low-cost, sustainable alternative for families to supplement their home heating needs. A four by eight foot solar collector panel, made of a black metal film covered by a sheet of tempered solar glass, is mounted and installed on the south side of the house, where it absorbs heat from the sun. A 60-watt electric blower pulls cool air from inside the home, where it is heated by the panel and then blown back into the house via a return duct. A thermostat located inside of the house regulates the blower and turns on the system whenever the air inside of the collector panels is warmer than the temperature set by the thermometer. Although the systems do not produce electricity and do not have the ability to store heat, they can supplement a family’s existing heat, or allow them to reduce existing heating costs. In total, a solar air heating system can save a family 20-30% on their heating bills in the winter and it costs about $1,600.00 to manufacture. The systems are also automatic, require essentially no maintenance, and last for decades. LSE’s solar air heaters are manufactured at a facility in Pine Ridge, South Dakota. The air heaters are a good fit for tribal families, since they cost significantly less than traditional solar electric or solar water heating systems. Although Native Americans pay federal taxes and would be eligible for federal tax incentives on systems, the majority of families do not earn enough money to pay taxes and therefore cannot take advantage of existing federal incentives.

Challenges of Running a Business on the Reservation

But running a solar business on the Pine Ridge Reservation is difficult. Private enterprise is not as common on the reservation and renewable energy is still a relatively new, unknown technology. On top of that, Pine Ridge is one of the poorest communities in the US. With unemployment rates exceeding 85 percent and over 90 percent of residents living below the Federal poverty level, there is not a good market for solar heaters among individuals on the reservation.

Because of this, LSE has partnered with the nonprofit Trees, Water, & People (TWP). TWP helps to secure grants to put on workshops or other nonprofit educational events aimed at helping people learn about the technology and why renewables are a good investment.

TWP helps LSE build a market for renewables by creating demand for the technology, particularly among local tribal governments or tribal entities that are more likely to have enough funding to pay for a system. Both organizations often work with a tribe to set up a pilot program, installing a solar air heater on a tribal building or other shared space. LSE and TWP find that tribes are generally open to the idea of a solar project, but that it sometimes takes time and perseverance to implement a pilot project because tribes are unfamiliar with the technology, don’t see it as a priority, or have limited funding.

LSE and TWP also work together to offer trainings at the Red Cloud Renewable Energy Center. Tribes all over the country can attend a 10-day training on how to manufacture and install the solar air system. To date, over 150 tribal members have received training from LSE, with 40 earning their Solar Technician I certification from RCREC. The goal of the trainings is that tribal members can return home to start renewable energy programs and businesses in their own communities. TWP has worked with some to help fundraise the start-up costs for their own business. Some tribes have also been interested in setting up business training programs, but TWP has run into some barriers with follow through. There is little historical support for or understanding of native-owned business for the majority of the population and even those who support the ideas often do not have the up-front capital to start their own solar business.

Looking to the Future

In the future, LSE has plans to continue to grow. The company is in the final stages of building its new training annex, which will provide more space to host larger trainings and events. LSE plans to also expand their programs, train more Native installers, and set them on the path to start their own businesses. They recently hosted an extremely successful Indiegogo campaign to help LSE gain Native 8(a) status, so LSE can secure set-aside federal contracts for disadvantaged businesses. 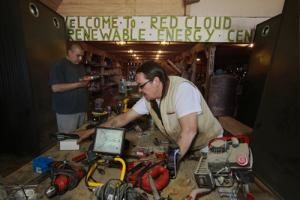