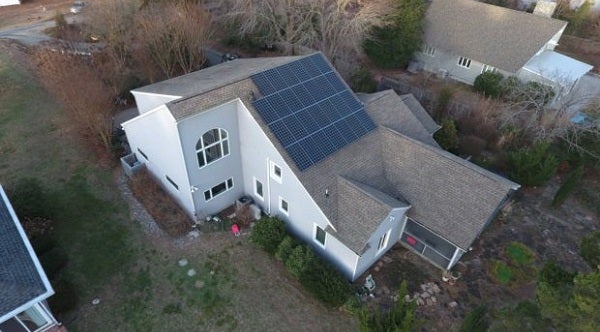 Nestled between the Rappahannock and York Rivers lies Virginia’s Middle Peninsula. The Middle Peninsula has long been known for its rich soils and views of the Chesapeake Bay. Now, thanks to the efforts of local residents and VA SUN, the Middle Peninsula can add a new item to its list of notable features: solar panels.

In September of 2016, a group of homeowners partnered with VA SUN and the Hampton Roads Solar Tour to launch the Middle Peninsula Solar Co-op. By going solar as a group, Middle Peninsula residents were able to pool their bulk purchasing power to save money on solar install costs and create a local network of solar supporters. Through extensive outreach efforts – including three public solar information sessions – the co-op grew to welcome more than 70 members.

Shockoe Solar began meeting with individual co-op members in November to generate preliminary contracts for each member. Contracts are customized to each co-op member’s home and budget, but reflect the co-op’s discounted pricing. Since November, 11 co-op members have signed solar installation contracts, with dozens more in the process of analyzing and reviewing their contracts. Already, five co-op members have had their systems installed on their roofs and are now producing their own solar electricity.

“Middle Peninsula Solar Co-op members have been wonderful!” said Bernie Stanley, Shockoe Solar President. “They all share a friendly and relaxed demeanor that makes us feel more like friends than solar contractors. We are thankful for this opportunity and look forward to many more projects in the area to come.”

And the feeling of solar excitement is mutual.

“Being part of the Middle Peninsula Solar Co-op has been a thoroughly educational and pleasant experience,” said co-op member Janice Moore. She recently signed a contract to install panels at her Deltaville home. “The VA SUN team is knowledgeable and quite willing to help co-op members understand the various aspects of solar installation.”

For Moore, the excitement of going solar permeates her daily life. Her system comes with a monitoring tool that allows her to see how much electricity she’s generating. The solar electricity generated by her panels has already had a significant cost savings impact on her electricity bill.

“My first monthly electric bill after which my solar panels were installed just arrived from Dominion yesterday,” Moore said. “I’m thrilled to say that it was only $46, compared to my pre-solar bill of $125. Quite a savings!”