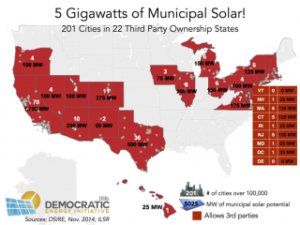 Municipal-owned buildings present a significant, but underused, source of roof space for solar installations. This was the main takeaway of a recent webinar lead by John Farrell of the Institute for Local Self Reliance. Importantly, there is a good deal local solar activists can do to encourage their cities to go solar.

Along with the webinar, the organization released a report finding the potential municipal solar market is larger than 5 gigawatts. To put this in context, this 5 GW of solar is about equal to a quarter of all of the solar currently installed in the United States.

A growing number of municipalities have recognized solar energy as a smart investment that will save them money. The report cited a number of examples of the impressive savings solar has provided to municipalities. Lancaster, California has installed 9 megawatts of solar energy that it is using to save nearly half a million dollars per year. In New Bedford, Massachusetts, the city installed 16 megawatts of solar, offsetting costs of 2.5% of its entire city budget.

These examples show the great potential for municipal solar. So why isn’t it everywhere yet? A key sticking point in the development of this resource is the structure of federal tax credit for solar. Municipalities collect taxes. They don’t pay them. So, municipalities have no tax payments for which they can receive the credit. This puts municipal solar projects at a financial disadvantage, as they are less attractive to project developers and financiers.

Unfortunately, 26 states do not allow third party arrangements between cities and third parties. This means municipalities in those states have to fund the cost of systems up front.

Another barrier to municipal solar is the time it can take for municipalities to decide move forward with a project. Municipal projects tend to have more decision-makers involved than do private projects. This can slow down the sales time, making the projects less attractive for installers to bid on.

Both of these barriers can be overcome with a strong push from the public to encourage their elected officials to pursue solar. Farrell urged solar advocates to call and write to their elected officials to encourage them to put solar on municipal buildings. He noted that many cities have climate action plans, geared toward lowering their carbon emissions. Solar has a pivotal role to play in these efforts.

Municipal solar can spur the development of privately-owned solar as well. In addition to the installation of solar on more than 50 city buildings, Kansas City, Missouri has significantly improved its solar permitting process. It has reduced solar permit waiting times to eight hours or less and also provides online permitting. Kansas City now ranks second in the Midwest, behind Indianapolis, in terms of solar installed per capita. Stories like this demonstrate the potential benefits of pushing cities to go solar.

An archived version of the webinar is available here.

The Public Rooftop Revolution Municipal Opportunities for Solar from Applied Solutions on Vimeo.