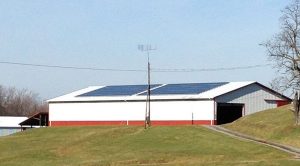 How much solar energy could West Virginia really produce? A lot of it. This is according to a new report from West Virginia University and Downstream Strategies. The paper forecasts between 50 and 150-fold growth for solar over the next fifteen years.

This growth isn’t guaranteed, however. The report makes several recommendations that West Virginia could take to see this sort of growth in its solar sector. The first step the state should take would be to protect its current net metering law. Net metering is the system by which solar owners are credited for the excess generation produced by their systems. The Public Service Commission (PSC) initiated a review of net metering in the state last year. The report produced by its study committee encouraged the commissioners to keep the policy in place. Because the PSC’s own staff attorney’s recommended leaving the net metering policy the way it is, we are cautiously optimistic that the PSC will do just that.

The paper also calls for the development of a renewable portfolio standard to encourage further development of solar. The standard would incentivize solar development by holding the state’s utilities to procure a certain percentage of their electricity from renewable sources. This policy has been successfully used in neighboring states such as Ohio, Pennsylvania, and Maryland to grow the market for solar in those states.

Together, these steps can help more folks in the state go solar, save money, and invest in our state.