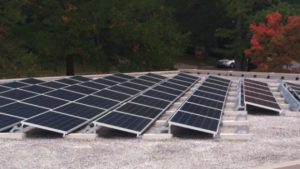 A recent study led by The Solar Foundation on the use of solar in schools across Maryland found solar has the potential to save the state tens of millions of dollars. Mary Liang, program associate at The Solar Foundation, explained the aim of this report was to “determine which parts of the state stand to gain the most from the deployment of solar on local schools”.

Maryland currently ranks 9th in total solar capacity on schools. The report identified nine public school districts in Maryland – representing about 77% of the state’s K-12 schools – as able to reach their full PV capacity potential in the course of the next 30 years. This level of adoption would save Maryland schools about $33 million.

More than three-dozen schools around the state have installed have solar PV systems. This means almost 2000 schools that have the potential to do the same cost-effectively. This would produce enough energy to power around 12,000 Maryland homes.

“To keep this trend moving in the right direction, the state can create a solar schools initiative to incentivize schools and local governments to deploy more solar energy systems in their counties,” Liang said.

The report also found that solar offers benefits beyond energy production. Schools can use the cost savings generated by solar to reinvest into the public school system. The addition of solar would increase student performance by generating greater learning opportunities on renewable energies and other STEM disciplines. The construction and upkeep of the solar systems would also help with the state’s economic development through job creation resulting in $270 million in economic activity.