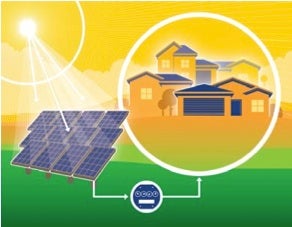 Maryland is slowly moving closer to making solar available for all residents. This long process continued last week as the state Public Service Commission held rule making sessions to consider proposed changes made by the community solar working group, as well as from previously filed comments and testimony. The Commission used the rule making sessions to review the regulations and ask lots of questions of the Commission’s technical staff (who drafted the regulations) and of various stakeholders.

Community solar allows utility customers to receive credit on their electric bill from energy produced from an off-site solar system. This allows renters and homeowners who are unable to put solar on their own homes to benefit from solar energy. Last year, Maryland passed legislation to start a three year community solar pilot program.

a) The size of the program – The initially proposed program size from the draft regulations was 2% of peak demand in each utility territory. Across Maryland, this comes to around 300 MW of community solar permitted over the three years of the pilot.

b) The subscription credit rate – The proposed draft regulations propose a full retail subscription rate (the amount of money you get credited on your bill for every kilowatt-hour (kWh) your subscription produces) which mirrors what you would have received if the solar were on your roof. The proposed regulations also include a subscriber organization fee which is a percentage of the distribution rate applicable to each kWh delivered.