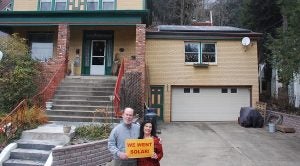 Neighbors in the greater Richmond area have formed a solar co-op to save money and make going solar easier, while building a network of solar supporters. Drive Electric RVA, Route 5 Corridor Coalition, RVA HUB and Solar United Neighbors are the co-op sponsors. The group is seeking participants and will host an information meeting on Wednesday, January 31 at 6:30 p.m. at the Ginter Park Branch Library to educate the community about solar and the co-op process.

Richmond residents, including those in Ashland, Mechanicsville, and Petersburg, interested in joining the co-op can sign up at the co-op website. Joining the co-op is not a commitment to purchase panels. Once the group is large enough, Solar United Neighbors will help the co-op solicit competitive bids from area solar installers.

Co-op participants will select a single company to complete all of the installations. They will then have the option to purchase panels individually based on the installer’s group rate. By going solar as a group and choosing a single installer, participants can save off the cost of going solar and have the guidance from the experts at Solar United Neighbors.