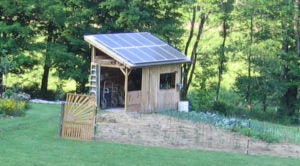 Wallace, West Virginia resident Autumn Long has gone solar and wants to educate others on how to do the same. She’ll be holding an open house July 12 from 1-4pm to display her home’s solar system.

Long and her husband, Dan Harrington, had a 10-panel, 2.7kw system installed last January. It sits atop a shed on the couple’s property. The system provides enough power to significantly cut the Long’s energy bills. They only pay their electric co-op a nominal $25 monthly connection fee.

Autumn and Dan’s system is not on the same electric meter as their home. But, they are still able to count the electricity generated toward their home’s usage because of aggregate net metering. Aggregate net metering allows utility customers, like Autumn and Dan, to receive credit on any meter, not only the one connected to the solar system. This is important because it allows Autumn and Dan capture the full value of the electricity their system generates and recoup their upfront investment in solar.

Autumn became interested in solar for a number of reasons. As a proud, life-long West Virginia resident, she is very conscious of preserving the state’s fragile natural resources. Powering her home with solar is one way to do so. She also said that having the system has made her much more aware of her energy usage and ways to reduce her consumption.

Autumn is excited to help others go solar. She has high hopes for the growth of solar in West Virginia. She noted the development of several solar co-ops around the state will make it easier for West Virginians to go solar, as the groups will help take advantage of bulk pricing to power their homes.

If you would like to stop by and learn more about the system, Autumn’s contact information is below.