Neighbors in Montgomery County have formed a solar co-op to save money and make going solar easier, while building a network of solar supporters. The Montgomery County Department of Environmental Protection, the cities of Takoma Park and Rockville, along with MD SUN are the co-op sponsors.

The co-op is seeking members and will host its next information meeting June 9 at 7 p.m. at Rockville City Hall (111 Maryland Avenue) to educate the community about solar and the co-op process.

The group is forming at a time when solar is booming in the area. Data from the City of Rockville shows how impressive this growth has been. In 2008, the Rockville had requests for just three permits for a solar panel system. It had 183 requests last year. 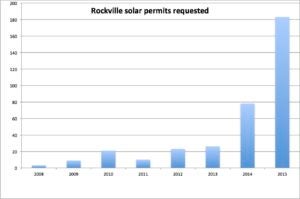 The Montgomery County Solar Co-op hopes to build on the success of last year’s group in Rockville. That group helped 29 homeowners go solar in 2015, accounting for about a sixth of all the solar installed in the city. Less than halfway through 2016, the numbers continue to look promising for solar. The City has had 81 requests so far this year. The new co-op hopes to significantly boost that number.