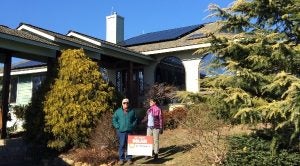 Rappahannock County Solar Co-op members Bill and Aleta Gadino had a 7.3 kW system completed at the end of 2015. The couple joined the group through Aleta’s involvement in the Rappahannock League for Environmental Protection (RLEP). RLEP members heard about the co-op model working well in Washington, D.C. and decided they would try it in Rappahannock County. And work well it did. In a county of just over 7,000 residents, nearly 50 homes have gone solar to date.

“We had been thinking about solar for several years for several reasons,” Bill said. “Our primary reason is sustainable power to our home without harming the environment. We also knew that we would save money (i.e. energy costs as we get older and have less spending power).”

The Gadinos were interested in solar, but had many questions: how much power would their home require; what was the cost of a system; where should they mount the system for maximum efficiency; how did solar incentives work; and how long would the system last. “It was an education for us,” Aleta said.

They attended an information session hosted by RLEP and VA SUN. “After two to three hours, all of our questions and much more were answered by the presenters and we were excited,” Bill said.

The Gadinos have been pleased with their system’s performance. The first month they saved about $75. When their system was installed initially, they did not include a monitoring system owing to the their area’s poor internet service. Last summer they noticed their electricity bills were higher than they should have been. Working with VA SUN and the co-op’s installer they discovered the cables that carry electricity to their inverter had a blown fuse during a previous storm. The installer replaced the blown fuse for free and reimbursed the couple for their lost production.

As part of the fix, the installer provided an internet booster which allows the couple to more accurately monitor their system.

“I now make it a habit both go down in my basement to read the solar panel status plus visit the solar monitoring site weekly to insure the system is functioning properly,” Bill said.

The couple runs a winery and is saving up so they can add solar to it as well.