John McNamara is a fervent solar supporter in Maryland. After going solar with the Montgomery County Solar Co-op in 2016, John has hosted a Solar Open House, served as an information session ambassador, and shared his story through a homeowner video testimony (just to name a few!) Here are John’s words about why he went solar, and why you should too! If you’re interested in going solar in Maryland, you can find a solar co-op open in your area today! 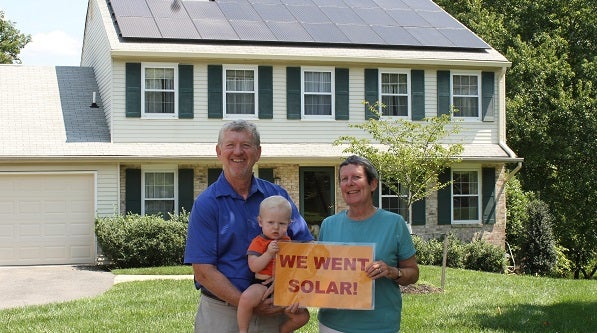 Installing a solar array on my roof satisfied three major goals for me: “do good,” “do well,” and “do as little as possible.”

The “do good” part is obvious. Climate change is real and it’s coming on faster than we expected. The birth of my grandson last year really drove this home. If we don’t bend the curve now, his generation should never forgive us. The equivalent question of “What did you do in the war, Daddy?” will be “How did you let this happen to us, Grandpa?”  We can’t wait until someone else fixes it. It’s either our finest hour, or our worst. Renewable energy isn’t the whole solution, of course, but it’s a big part. So, doing good was why I went to my first info session sponsored by Solar United Neighbors.

The “do well” part was the pleasant surprise at that info session. I had a generic layman’s knowledge of solar energy, composed of mostly out of date information about costs and performance. I was amazed by the charts showing the (low) costs, (rapid) paybacks, (generous) incentives, etc.

“This is a slam dunk,” I thought. “Why doesn’t everyone do this?” My take on the economics of going solar is that it should be part of anyone’s long term savings plan.  My installation ended up, after rebates, costing about $17,000, and it saves me about $1700 a year in electric bills. I could think of that as a 10-year payback. Instead, I think of it as a 10% return on an investment—forever and tax free. If there were any other investment vehicle that paid a guaranteed 10%, I would be signing up immediately.

So, my solar investment is doing well, to say the least.

Doing as little as possible has also long been a personal mantra. The Italians have a lovely expression, “Dolce Far Niente,” the sweetness of doing nothing. My years-ago scuba diving instructor said it well when he told us: “If you’re working hard, you’re doing it wrong.” He was talking about diving, but I find that it applies to many endeavors just as well. It’s certainly true of going solar with a solar co-op.

Without the help of our solar co-op, the hardest part would have been obtaining and evaluating competing bids. The variables (inverter? microinverter? US made? Foreign? High efficiency? System size? Purchase or lease? Etc.) would scare away most Harry and Harriet Homeowners, me in particular. If you thought buying a car is bad—with all the jargon and options—this is worse.  Or it would be, if you did it alone.  But Solar United Neighbors made it easy.

They got all the bids, boiled them down to one spreadsheet, and advised our selection committee through the process. In less than two hours we had the best vendor with the best price and best package. I scheduled my home consultation with the chosen supplier and signed a contract the same day. And the “doing as little as possible” philosophy didn’t stop there. Installation took less than a day. The supplier arranged all the inspection and coordination with the county and the utility. I did, well, as little as possible!

Our solar system has now been up and running about a year and a half, and all I’ve done is…nothing.  When my tenth straight monthly electric bill arrived with a below-zero balance, I just sat back. The smart phone app tells me I’ve planted the equivalent of 850 trees and removed 10 tons of carbon emissions from the air. I like relaxing and thinking about all those trees I didn’t have to plant and carbon I didn’t scrub. It makes me feel righteous without lifting a finger.

Ironically, all this indolence has made me a solar activist. I find it hard to say no when the folks at Solar United Neighbors ask for volunteers to work on a launch event or host an Open House. It pains me to see friends and neighbors make bad decisions (and a no decision is a bad decision, too), when the right answer is so easy.

I find that we unofficial ‘solar ambassadors’ fill a role that the scrupulously-neutral Solar United Neighbors staff cannot. We’re free to lard on our own opinions—about the suppliers, the electric company, lease vs buy option, etc.—the way one neighbor talks to another. I don’t have to be diplomatic (although I try to be fair and accurate). And who doesn’t like the feeling of being that kid in school, waving his/her hand at the teacher saying, “Call on me! Call on me!  I know the right answer!”