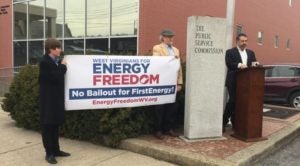 A similar transfer of ownership of the Harrison Power Plant in 2013 has cost Mon Power and Potomac Edison customers more than $160 million so far.

West Virginians For Energy Freedom members WV SUN and Energy Efficient West Virginia, joined by the WV Consumer Advocate Division, delivered a letter Jan. 31 to the PSC explaining how Mon Power’s recent request for proposals is part of FirstEnergy’s plan to sell the Pleasants plant, so that Mon Power and Potomac Edison customers are forced to bear the plant’s financial risks. Click here for a copy of the letter.

“Mon Power and Potomac Edison customers have seen enough rate increases,” said Emmett Pepper, executive director of Energy Efficient West Virginia. “FirstEnergy is bending over backwards to find a reason to force West Virginians to pay for this plant. We don’t need the Pleasants Plant’s energy, and it wouldn’t be a good deal for customers, even if we did.”

West Virginians For Energy Freedom includes individuals, organizations, businesses and officials who believe they should not have to bail out FirstEnergy Corp. and its shareholders.

During the press conference, The Rev. Jeffrey Allen of WV Council of Churches, a coalition member, said utility bills are one of the most frequent requests that come before faith-based and social service agencies as a need of those seeking assistance in the state. “Families can face dire circumstances when funds run low to pay utility bills,” The Rev. Allen said. “It makes sense to us, then that power companies should seek to produce electricity at the lowest rate possible, because of the impact these rates can have on low-income families.”