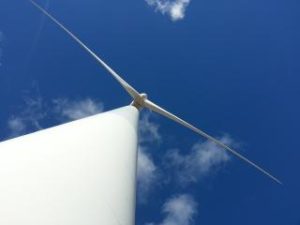 More than 40% of new electricity generation came from wind energy last year. This growth is almost entirely from land-based wind turbines. Offshore wind projects have had a difficult time getting built for a number of reasons. Chief among them is local community opposition. The approval this summer of Deepwater Wind’s project off the coast of Long Island shows a potential path forward for this renewable source of energy.
The project gained approval because it addressed a community’s unique energy needs. The decision-making process around the project was multi-directional, meaning nonprofit groups, individual activists, and elected officials worked together to find common ground. The result was a far more democratic process and, possibly, a model for other communities.

In mid-July, the Long Island Power Authority (LIPA) formally recommended to its board of directors a proposal from Deepwater Wind. The final vote is anticipated to occur sometime between October and December. The proposal is to construct a wind farm in federally leased waters east of Montauk in Suffolk County off Long Island. When completed, the15-turbine unit located about 30 miles off the coast will generate 90 megawatts of electricity. This is enough electricity to power approximately 50,000 Long Island homes.

Patrick Robbins, a Co-Director of the climate advocacy group Sane Energy Project, emphasized that this moment represents part of a years-long process.

“There has been a long campaign for many years for offshore wind in Long Island that includes community members as well as activists and people who would be employed by the industry if these projects came to pass,” Robbins said. Offshore wind is overwhelmingly popular.”

David Alicea, an Organizing Representative with the Sierra Club’s Beyond Coal campaign noted the area’s geography creates unique challenges when it comes to delivering power to the end of the island. This, coupled with increasing energy demand has led to increased use of expensive diesel and natural gas peaking plants. In response, the Long Island Town of East Hampton committed itself to sourcing 100 percent of its electricity from renewable sources by 2020. The Deepwater project will play a key part in this commitment.

Alicea also partly attributed the success of this effort to Deepwater Wind itself. “Over the past few years, Deepwater has worked with the local community, elected officials and organizations to discuss the project. Additionally, Deepwater has collaborated with the Long Island Federation of Labor to help ensure that many of the jobs created by this project employ local residents.”

Community outreach played an important role on the nonprofit side as well. Alicea said his organization as well as others engaged in an active public education campaign to build support for offshore wind projects.

Gordian Raacke, Executive Director of Renewable Energy Long Island (reLI), also attributes the success of this effort to the education and awareness of the community. In his words, people of the area had come to realize that “we have a lot to lose” by not adopting wind power and other sources of renewable energy.

“We have helped educate the community on the benefits of offshore wind and given them the tools to demonstrate that support to decision-makers, through various tactics that include public hearings and letters to the editor to local publications ‒ all demonstrating that Long Island’s East End is ready to move forward with offshore wind.” Alicea said.

Under the umbrella organization WinWind NY, a coalition of dozens of groups addressed letters earlier this year to New York Governor Andrew Cuomo and New York City Mayor Bill de Blasio. The letters were created to express these organizations’ strong support for offshore wind and urged those elected officials to take action to enable its development.

The wind farm off Long Island is only the first phase of Deepwater ONE, an ambitious program by the company to produce up to 1,000 megawatts of electricity from turbines from Long Island to Massachusetts. It will be built in several stages. The community-based outreach program developed in Long Island can serve as a model to engage communities along the Deepwater ONE project.