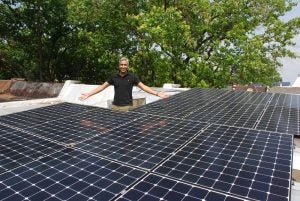 I went solar for environmental concerns, net-metering and solar credits.

Since I got an electric car, my power usage had gone up, and going solar was a way to offset the increased electricity cost. I have always been interested in using solar power — and renewable energy sources in general — because it reduces environmental pollution, has no carbon emissions, and uses fewer natural resources.

The solar co-op that was active in my area has provided a wealth of information about solar systems; the cost and financing options; and, most important, the net-metering and solar credits, which is a great incentive in D.C. metro area. My co-op, East of the River, also had special pricing with the installer, which helped reduce the system cost as well.

Many things: From the solar equipment point of view, I was surprised at how simple the system is and the efficiency at which it produces power. Net-metering and solar credits, particularly in D.C., help pay off the system in about 3-4 years. After that point, the system will become an additional source of income.

My solar system is about 4.5 kW in size and it produces, on average, about 25 KW on sunny summer days. On a monthly basis, it has produced about 300 KW in winter, and up to 700 KW in the summer. Typical townhouses like mine use an average 1,000 KW a month in summer, toward which the solar system can contribute about 70% cost saving.

I would advise anyone who is considering going solar to attend an educational session, read online materials and also calculate an ROI using sites like mapwell.com (https://www.mapdwell.com/en/solar/dc).

After having this solar system for year, I can say the benefits of going solar, especially in DC area, can be looked at from three main points of view: