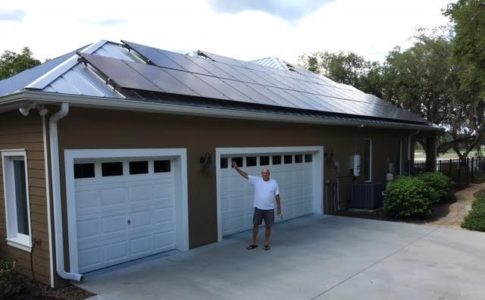 Imagine, essentially free power after my break-even point of 7.8 years! No question on moving forward!

Going solar was actually an idea that was recommended by my son, Matt Conrad. He had been doing quite a bit of research and tried to convince to me to investigate this option. I was, initially, hesitant, to put out the money. He then learned of the West Orange Solar Co-op and convinced me to go with him to the initial meeting, Well, the rest is history…

I made my initial contact in October of 2015, received confirmation that I was a viable candidate the same day and then attended meetings in November of 2015. I also volunteered to be a member of the selection committee and signed a contract after the team decided to go with SEM Power, LLC. The Co-op price and return on investment was something that was foolish not to entertain. Imagine, essentially free power after my break-even point of 7.8 years! No question on moving forward!

The entire process was professional, easy to entertain and always informative. The contract analysis of my usage and power needs was easy to understand and time spans from start to finish  (estimated) were included. I would certainly recommend using a co-op, for the price break, and hope more people install solar to get off the grid, save trees and reduce CO2 emissions.

My bill for the past year averaged $186 per month (pre-solar). After solar installation my bill has been $9.88 per month. This is $8.76 for grid connections fees (can’t get around this) and $1.12 in taxes. This was for the first three months after installation; March – May 2016).