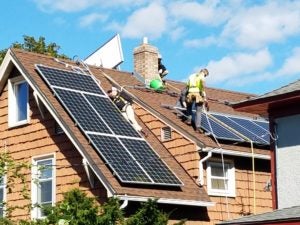 We loved the diverse workforce, going solar together was faster.

I’d been interested in the harvesting of solar energy since I first read about the then new fangled solar thermal water heating systems back in the 1960s, and I’d followed the development of solar energy continuously since. Especially since about 2014, when I perceived that costs for installing solar voltaic systems had reached the practical level, I’d tracked my financial situation to try to find a way to afford it. That point was finally reached about two years ago, and I started looking into it seriously.

My interest in solar stems both from my general attitude about conservation and my futuristic attitudes — I am a published futurist. Because I’m mostly retired, I’m not sure that I will even have sufficient income to receive the full federal tax credit for my system, but I nevertheless want to be able to point to my solar system as one of my activities when my grandchildren ask me what I personally did to prevent climate calamity.

I’m glad I worked with the co-op because I both saved a couple of thousand over what I’d expected and budgeted for, and got my installation completed sooner than if I had gone with my previous independent bid, based on the timelines and waiting list that original vendor was projecting. I know the accuracy of this latter point because a neighbor signed a contract with that same vendor about a month before the co-op was even formed, and didn’t get her installation underway until almost two months after mine was completed.

About a month before the Minneapolis Solar Co-op formed I’d even gotten a bid for installing a system from a local company, but then held off when I learned of the co-op, pending its work. I then volunteered to be on its selection committee to review the responses to our RFP because having a recent actual bid on hand enabled me to make solid comparisons to what our bidders were projecting.

Join the co-op.  It is a no-strings way to learn about solar and whether it will work for your family and your home.

I’ll also note I’m pleased that my installer was both a minority-owned business and hired a diverse workforce. The proof of the later was his presence working on the actual job, and the mentoring of the new hires he brought on to meet the installation volume of the co-op contract, one of whom was a woman who worked up on my third story roof along with everyone else in his crew.