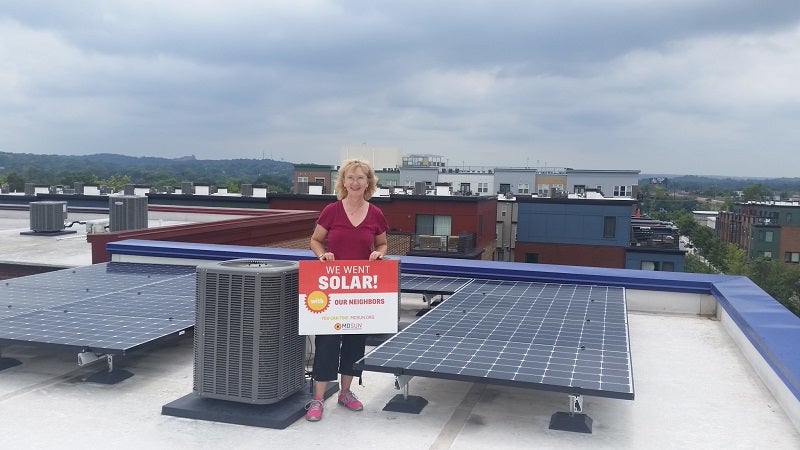 Solar is a dream come true! I’m so grateful the cooperative helped us through each step along the process.

I always wanted to have a rooftop solar system since the 1970s when I first read about solar power. At that time, solar technology was either too unreliable or too expensive. Several decades later, we had the money – but our house and roof were unsuitable due to shade and slate material. In 2010 I invested in a groundbreaking Community Solar LLC and later became a member of a Community Solar Thermal LLC. Although I receive income from these projects, we were not able to receive electricity from them.

In 2014 we moved to a new development of four-story townhouses in bright, unblocked sunlight, and I knew my chance had come –finally– to acquire rooftop solar. However, I felt a little overwhelmed. Would our HOA try to prevent us putting panels up? How would we go about selecting a trustworthy installer? How much trouble would it be to communicate with/motivate the installer? What about the paperwork associated with grants, rebates, and SRECs? I also wanted to wait two years to make sure our new roof didn’t have any warranty issues, before installing solar panels.

Late in 2015, just about the time we were ready to start researching, I learned about the solar co-op and its availability to help us through the maze-like process.  A buying co-op was being formed in Prince Georges County; perfect timing! I have been so grateful for the way the co-op held my hand through each concern and each step. Our co-op chose an excellent installer (Solargaines, Inc.). They advised us that we could only fit enough panels on our small flat roof space to offset a third to one half of our household electricity usage. We chose high-efficiency panels in order to maximize the production from this small space. I was extremely impressed by Solargaines’ good cheer, efficiency, and professionalism. Carrying 13 large panels up 2 ladders to a fourth-story roof is quite a challenge, but the installers took it all in stride.

Corey Ramsden of Solar United Neighbors stopped by a couple of times to check up on our satisfaction. I enjoy consulting our online monitor to watch the steady production from our system. There have been no problems whatsoever, and we’ve had great output in the eight months following installation. [Solar] literally is a dream come true!

In the last eight months, we’ve saved an average of $58 per month on our electric bill. Now heading into the brightest time of year, so that figure will go up.