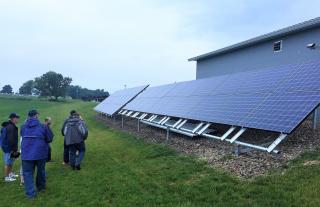 Community solar provides economies of scale that can make solar a better deal for participants. Nearly three-dozen Minnesota government entities have taken this idea to the next level by banding together to create community solar projects. In doing so, they’ve created a new model for community solar that can be improved upon and expanded to increase solar adoption.

Minnesota’s Clean Energy Resource Teams (CERTs) are a statewide partnership connecting individuals and communities to community-based clean energy project resources. They have recently published a report in which details the results of their effort, the first governmental community solar subscriber collaborative in the United States. While collaborative solar procurement has already been accomplished for rooftop solar on public buildings, this was the first time this had been done in the U.S. for community solar, and it was the first time ever for either type of solar in Minnesota.

In February 2015, thirty-one government entities in Minnesota, mostly in the Twin Cities metropolitan region, banded together “to procure solar garden subscriptions from a single ‘Request for Proposals’ (RFP) process to offset the energy usage at public facilities”. The rationale was to save energy costs through “economies of scale,” by which the governmental entities together could purchase the renewable energy more cheaply than they could through separate negotiations with developers. This process would also reduce the entities’ administrative costs. The report indicates that, though the project’s success was, as this article claims, “modest,” there was general agreement that the project was well worth doing.

The project was open to any local government that is also an electricity customer of the Minnesota utility Xcel Energy. The first step that the 31 local governments took was to locate a single organization that could write and issue the RFP on behalf of the participating entities. They chose Metropolitan Council to be the procurement, financial, and technical lead organization for this project. The Metropolitan Council is a regional planning council responsible for transportation and other public services.

“The Council was the right fit for a few reasons. First, they are among the larger local government entities in the state, and therefore had the staff capacity and expertise in-house to lead the procurement process,” said Metro CERT co-director. Drake, was also a co-author of the final report. “Second, the council had a policy in place – Thrive MSP 2040 – that supported their leadership among local governments in the region. Third, they had recently executed an RFP process to develop solar gardens on their land, so had more experience than any other entity at that time. Our steering committee, which was made up of most of the larger local governments in the area, jointly agreed that it would be best for the Metropolitan Council to lead the process.”

Initially, the governmental entities estimated that they would collectively be willing to purchase up to 180 MW of solar. In actuality, they received offers from only five developers for a total of about 70 MW, of which slightly less than half – 33 MW – was finally purchased: in other words, less than 20 percent of what was anticipated.

“For those that didn’t respond, I think it was a combination of the short timeline, the size of the request, and uncertainty about the program rules, which were changed – while the RFP was open – to limit the co-location of multiple solar gardens at a single location,” Drake said. (See CPN’s article from September 2015 about the solar garden co-location compromise in Minnesota.)

Metropolitan Council, negotiating on behalf of the municipal entities, had created a standard subscription contract for the vendors. This was done assuming the developers would readily accept it with modifications. But as might be expected, the vendors rejected that contract, and the contract which the vendors then offered was rejected by the Council, leading to a delay in negotiations.

“There were a few issues at play,” Drake said. “The first was that the contracts needed to be agreed upon by three parties – the Met Council, the developers and the developers’ financiers. This likely limited the ability of the vendors to accept the standard subscription agreement, as they would have needed to also negotiate with their financiers. Another issue was that some of the vendors’ proposed agreements didn’t abide by Minnesota laws on governmental procurement and data practices, and therefore needed to be modified before a government entity could sign them. The third issue was that the proposals were different enough that it would have been difficult to merge them into a single contract to which all parties could agree. Ultimately, separate negotiations seemed to be the most efficient process.”

Despite these glitches, and the fact that the amount of solar purchased was much less than originally planned, Drake considered the experience an overwhelmingly positive one. “I consider it a huge success that we proved this can be done in our state, and that we had such broad participation. From my perspective as someone working on clean energy projects with local governments, I also consider it a success that we convened, educated and assisted such a large group of government representatives to take action on a fast timeline. There are projects that ask groups of local governments to make commitments on clean energy, but this went beyond commitment to measurable action.”

“What was most surprising to me was the value of peer learning,” Drake said. “We didn’t set out to facilitate that, and yet it happened organically because there were so many participants in the same situation and making roughly the same decisions. I think this signifies an opportunity for clean energy projects to harness the power of larger groups following the same process. Normally with new clean energy approaches, somebody has to try it out while everyone else watches to see what happens. This enabled a ‘safety in numbers’ mentality that skipped that step.”