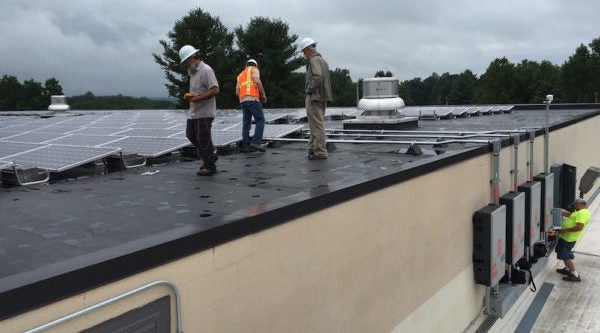 When Albemarle County students go back to school this fall, they won’t just be coming back to new classes. They’ll also be coming back to a new source of electricity. The school district will soon inaugurate solar on six of its schools. In total, the systems will save the district more than $3,000 per year. The push to go solar came from the students themselves.

In 2014, Caroline Firer was a senior at Monticello High School. All Monticello seniors are required to do a special project before they graduate. Firer’s interest in solar was sparked by her connection with 350.org, a group that is actively involved in fighting climate change.

Through that organization, Firer attended a local meeting about solar energy. There she learned about the technology and how various parts of the community, homeowners, businesses, and community organization could make use of it.

Caroline worked with fellow classmates to write a letter to their school board urging them to go solar.

“Student concerns drove the decision-making process,” said School Board member Stephen Koleszar. He said the students worked closely with school district administration staff to develop a plan to go solar that would be cost-effective.

This project is the first at a Virginia public school to use a power purchase agreement. This means there is no upfront cost to Albemarle County schools. A third party, Secure Futures, owns the system. It has agreed to sell the power generated by the system to the school at a fixed price. The school signed a 20-year lease on the panels, after which, the school takes ownership of them.

The district is branching out from solar Kolezar said. Using a similar financial model, the district will install LED lighting. This will save the district money, while improving the students’ learning environment.

“It’s great that we were able to see results from our action,’ Firer said. “It was something we were really passionate about.” Firer has taken this passion with her to college where she’s now studying environmental planning at Virginia Tech.