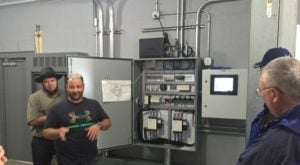 Every solar system comes with a device called an inverter. Inverters are a key component of your system. They convert the energy gathered from the sun by the panels to the energy needed to power your house. That is to say, inverters transform direct current (DC) into alternating current (AC). To understand why this change is necessary, let’s look at the difference between DC and AC.

Most household appliances and buildings are powered by AC because it is much easier to change the voltage level of AC. Additionally, AC  is better transmitted over long distances. In electricity’s early days, there was fierce competition between engineers as to which was the most efficient.

Thomas Edison was a strong backer of using DC. He even led a campaign in discouraging the use of AC citing safety concerns. AC became dominant at the end of the 19th century when engineers saw its ability to transmit power over longer distances.

Let’s explore how those differences apply to your system. Your system’s electrical output is measured in watts. It is important for you to be clear if that measurement refers to the panels’ AC output or its DC output. A panel’s AC output is different than its DC output: think of it like a currency exchange. One dollar is a different value than one euro.

Although AC won out as the electric current used by your home and appliances, many devices, such as batteries, still use DC. DC is also the form of electricity generated by your solar panels. This is why solar panel manufacturers label the output of their panels in DC.

Panels output measurements come in two ways: Standard Test Conditions (STC) and Performance Test Conditions (PTC). STC refers to a panel’s output under laboratory conditions. This is the most amount of electricity it could possibility produce. PTC measures a panel’s output in real-world conditions. To calculate your panels’ output in AC you multiply the aforementioned PTC measurement by your inverters’ efficiency – usually around 95%. This means the DC measurement will always be a larger value than the one for AC.

So you might wonder, is one measure better than the other? No, but is important when you are comparing quotes, that you are clear on which metric is used. This way you can make an apples to apples comparison.