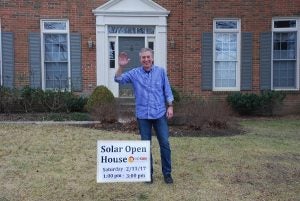 The first round of the Bowie Solar Co-op was a big success in 2015. More than 150 homeowners joined the group and 54 of them installed solar through the co-op. The second round of the co-op launched this February. With close to 50 people in the new 2017 group so far, it’s off to a great start. This is thanks in part to the support of 2015 members who are paying it forward to this latest round of solar cooperative purchase by volunteering their time and experience.

Solar information sessions are a great way to educate folks about solar and encouraging them to join a solar co-op. It’s been great having past co-op members attend these sessions to share their experience going solar and answer questions from prospective co-op members.

As another means of informing community members and encouraging potential co-op members, MD SUN asked if any 2015 solar co-op members would be interested in hosting a solar open house at their home. Quentin Smith answered the call, hosting an open house at his residence on a recent Saturday afternoon. Community members could drop by, see a solar installation up close and hear from Quentin on his experiences. One attendee asked questions about not only solar technology but about how the group’s installer is selected. Solar co-ops select their installer by committee with MD SUN providing administrative and technical support along the way. After the open house this particular attendee not only joined the solar co-op but also volunteered to be on the committee.

In addition to a final information session on March 4, at Bowe City Hall, the Bowie Solar Co-op will be hosting a Solar Mixer on March 16 at Old Bowie Town Grille. 2015 Bowie Solar Co-op members, MD SUN staff, and those interested in joining the 2017 group will have an opportunity to get to know each other and talk solar.

New members are open to join the Bowie Solar Co-op by filling out the online registration form.