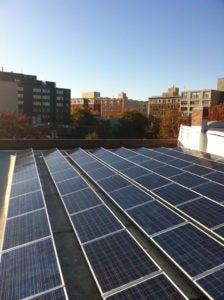 Maryland’s recent enactment of community solar legislation is a step toward bringing clean electricity and utility bill savings to all customers across the state. But how this will happen remains an open question. As community solar develops, Maryland would be wise to learn from community solar models elsewhere that deliver the benefits of solar to moderate- and low-income families.

Community solar is an exciting and disruptive innovation because it allows utility customers to receive the benefits of solar, even if they are unable to do so on their own roofs. The structure of community solar projects varies. But broadly, they allow people to subscribe to a share of a larger solar project. They are then able to credit that share to their monthly electric bill.

Research by the US Department of Energy found that 75% of Americans’ home roof space is not qualified for a solar installation. This may be due to shading or other roof conditions. But, community solar doesn’t just provide an opportunity to overcome physical barriers to solar. It can help overcome economic ones as well.

Community solar provides a path for moderate- and low-income customers to benefit from solar. Electric bills are a significant hardship for these customers, as they spend nearly four-times as much of their income on electricity compared to other households. Unfortunately, community solar programs to date are largely failing on this socio-economic feature of their promise.

To meet this gap, we need creative community solar financing approaches and business models. These solutions must solve the challenge of opening access to moderate- and low-income customers, without diminishing the expected returns of project developers. These same solutions will likely improve the simplicity and customer experience for all community solar participants, even those with higher incomes.

Several community solar projects around the country have managed to achieve limited participation by moderate- and low-income customers.

One approach with perhaps the greatest potential for success is known as the “anchor” or “backup” subscriber model. The idea is simple. Should any of the community solar customers fail to pay their subscription fees, the customer will lose their spot in the project and a “backup” customer is already contracted to immediately step in and fill the vacancy. Large credit-worthy commercial customers or municipalities make ideal backup customers. This is because they consume a lot of electricity and are able to provide the backup role for subscribers moving in and out throughout the 20-year or longer investment horizon of a community solar project.

Under Maryland’s current rules, “all rate classes are eligible to subscribe to a community solar energy generating system” (GAM §7-306.2). This provides an opportunity for the backup subscriber model to be applied to the entire capacity of a community solar project. Applying the backup model reduces pressure for project developers to set minimum credit score requirements and demand long-term contracts. This can benefit all potential subscribers, not only moderate- and low-income ones, by reducing the complexity and risk of signing up for a community solar subscription.

For the backup model to work, the commercial or municipal customer also needs to receive a sufficient portion of the project’s savings. This is what would make it worthwhile for them go through the administrative burden to enter a backup contract. In addition to this burden, there is also the need to overcome the opportunity cost of potentially getting a better deal from another project.

Here is an example of how a backup model could work in Maryland:

Here is how the project would be divided across different types of subscribers in its initial launch, based on the above example.

The backup subscriber model is already being put into action by a community solar project in Minneapolis. The project is a partnership between a local solar company and multiple faith-based organizations, including Interfaith Power & Light.

The organization’s Executive Director, Julia Nerbonne, told the StarTribune: “We don’t want people to be turned away because of their credit score.” To make this happen, a local church has agreed to take over the shares of subscribers who are unable to pay.

Maryland’s new community solar policy allows for projects that will in aggregate make up to 1.5% of the state’s peak power demand over the next three years. This would mean enough community solar to serve about 35,000 subscribers. Consistent with the General Assembly’s stated goals, the backup subscriber model provides a path to achieve significant participation in these projects by moderate- and low-income customers, who stand to benefit more than anyone by saving on their utility bills through community solar.

Joel Gamoran is the former Regional Director of Yeloha and a leading expert on community shared solar regulation and business models (linkedin.com/in/joelgamoran).