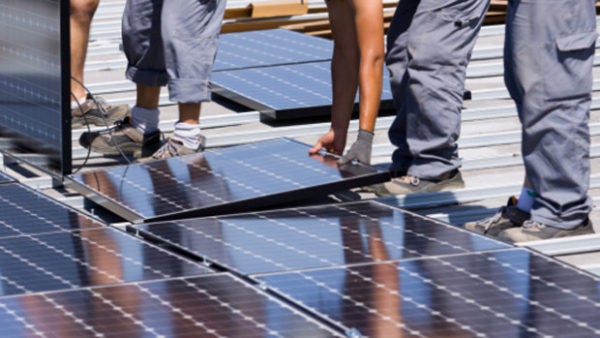 Check out the original article on WMAR-TV‘s site

Leigh Peterson fell in love with her Patterson Park neighborhood as soon as she moved there eight years ago.

But when she and her husband bought a row home on South Curley Street two years later, it was obvious the house needed a lot of work.

Like others on the block, it was built in the early 1900s and needed a new HVAC system and new windows.

Peterson said she was also interested in making her home as green as possible.

“I was raised in the country in Pennsylvania, so I think I’ve always been in touch with nature,” she said. “I recycle obsessively … I compost. I probably do more than most people would ever do.”

But money was an issue. She recently received her doctorate in nutrition and was still in grad school while making home improvements.

That’s when she learned about Retrofit Baltimore.

A project of Civic Works, a Baltimore nonprofit that provides job training and skills to residents in city communities, Retrofit Baltimore helps people find cost-effective ways to green their homes.

Peterson is now part of a solar co-op that allowed her to install panels on her rooftop at a cost of $34 per month for 15 years.

Retrofit also helped her make other improvements to her two-bedroom home, including improved insulation, the sealing of air leaks and a “cool roof,” which is installed on top of an existing flat roof and deflects heat rather than absorbing it.

Peterson is paying $60 per month for the next three years for these improvements.

“Most people think it’s too good to be true, but it’s totally legit,” Peterson said.

Eli Allen, director of Retrofit Baltimore, said the average retrofit saves homeowners around 20 percent on their energy bills. Peterson estimated she saved about $300 in energy costs in the first six months after the retrofit.

Retrofit has assisted about 700 homeowners since it began in 2011, Allen said.

“We want to have a positive impact in the community,” Allen said.

Ben Delman, spokesman for MD Sun, said residents have until April 22, Earth Day, to sign up for a co-op.

“If you talk to any solar installer, they’ll tell you one of their biggest expenses is marketing and consumer acquisition,” Delman said.

This brings customers directly to the solar companies, cutting their costs, Delman said.

“The other advantage is you are doing it with a group, and I think there is a lot of value in that,” he said. “It can be a complicated process.”

According to figures provided by Retrofit, a 3 kilowatt solar system for a small rowhouse would be around $12,000 before any incentives. For a large single-family home that requires a 9 kilowatt system, it could be as high as $36,000.

The co-op provides a discount of $3 per watt. With a 30 percent federal tax credit and the Maryland Residential Clean Energy Grant, the cost is decreased to just under $4,000 for a 3 kilowatt system and $13,805 for a 9 kilowatt system.

Solar energy advocates point out that such a system typically pays for itself over time, returning 5 to 6 percent in utility savings.

“It’s not just for the really well-to-do,” Delman said.