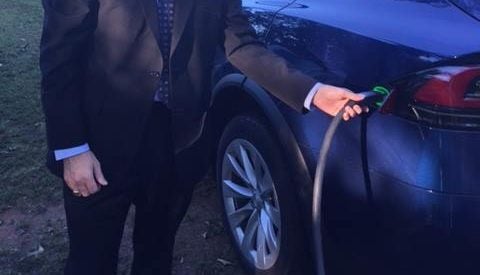 More and more Virginians are buying electric vehicles (EVs) and ‘fueling’ them with the energy they produce with solar at their homes. As EV adoption in Virginia increases, building out the charging infrastructure to keep pace with increasing demand remains a challenge.

Interestingly, Virginia’s beds and breakfasts have been some of the early adopters for electric charging stations. B&B’s are well-suited to offer ‘destination chargers’ in which EV owners can charge their vehicles as they stay overnight or stop in for a few hours for lunch or business meetings. Electric vehicle manufacturer Tesla began offering free charging stations to bed and breakfasts several years ago.

“We purchased the inn from previous owners this past fall with the charging station already installed,” said Kim Moore of the Inn at Onancock on Virginia’s Eastern Shore. “The fact that we have a universal charging and a Tesla station was appealing.” It’s also one of the only places on the Eastern Shore to offer EV charging for the public.

The B&B owners we spoke with noted that uptake on charger use has been gradual but see the value in offering an additional amenity to guests and providing the infrastructure to expand EV use in Virginia. They expressed excitement that the start of the summer season would bring along more users to coincide with the typical seasonal upswing in business.

“It’s a good PR piece that people know we’re forward thinking,” said Jeanne Jeffers of the Inn at Riverbend. “It seems to do it’s job. Everyone’s been pretty happy when they recharged.”

The electric charging station carries on a bit of family tradition for Janice Fitzgerald of the Inn By the Side of the Road in Harrisonburg.

“My father owned Standard Oil (gas) station and Standard offered him a second proprietorship in Riverdale because of the newly built Baltimore-Washington Parkway,” Fitzgerald said. “My mother thought he was absolutely out of his mind, because it was the hinterlands. The Baltimore-Washington Parkway became an important connector. I think that’s how I look at us, eventually the traffic will come as it did with the gas station.” Fitzgerald notes the same station is still in operation.

Solar has an important role to play in powering more vehicles with electricity. It provides cost-effective, locally-generated power to charging stations either on- or off-grid.

“[The solar system and electric charger] are part of the tour that I offer to every customer that I have,” Doan said. “They are interested in both cooperative solar experience and also electric vehicles.”