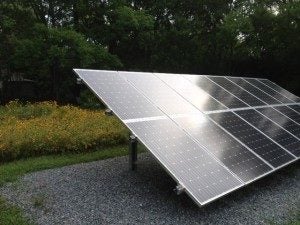 The use of energy from the sun goes back a long way. Before we discovered that the sun’s light could be collected to produce electricity, people took advantage of it in other ways. We used passive design to take advantage of the climate to maintain a comfortable temperature in our building. Passive design reduces or eliminates the need for auxiliary heating or cooling and has been used by civilizations for millennia. Ancient Greeks and Egyptians, as well as Native Americans, built homes and cities to have the most energy efficient sun exposure. They faced their buildings south, like we do with our solar panels.

Greek and Roman architecture developed with solar energy in mind. Porticos – series of thick and evenly spaced pillars – were built in order to let sunlight filter through. This allowed for the right amount of light and heat to come through.

In Ancient Egypt, black tile-lined pools of water collected solar energy throughout the day. At night, water would be used to keep palaces warm through the heated pipes.

It wasn’t until the 19th century that we began turning the sun’s light into electrical energy. In 1839, French Physicist Alexandre Edmond Becquerel discovered the photovoltaic (PV) effect. The PV effect is the creation of electric charge as the result of exposure to light through the stimulation of electrons in metals such as selenium or platinum as conductors.

Aleksandr Stoletov developed the first solar cell based on the photoelectric effect in the late 19th century. The industry didn’t begin to grow, however, until the development of a silicon-based solar cell by Bell Labs in the 1950s. The development of individual solar cells led to the manufacture of panels, which are a collection of solar cells. Solar panels are the optimal surfaces to capture the most light.

Throughout the 1950s, the efficiency of solar cells kept on increasing, from 8% in 1957 to 14% in 1960. The space race created a need for sustainable energy sources. It steered investments and development in the solar industry. In the 1960s, the first telecommunication satellite TelStar 1 launched by Bell Labs feature the most cutting edge solar cells.

Despite the great advances made in solar technology, it was not commercially viable yet due to its high price. As hard as it may be to believe, the initial push to lower the cost of solar came from oil companies. They recognized the future financial difficulty of sustaining energy production with oil. So, they started to invest in solar. Backed by Exxon, Dr. Elliott Berman designed a much less expensive solar cell. He brought the cost per watt down by 80%.

Since 2008, solar power has become increasingly popular as a renewable form of energy, as its price became affordable to a much wider market. Research and investment in solar technology continues at an energetic pace, with no shortage of engineers and innovators. Solar manufacturers continue to pursue technological improvements to make solar panels more efficient and less expensive.

Sign up for our newsletter and learn about how we’re helping homeowners bring modern solar technology to your community. Interested in going solar? Join one of our solar co-ops to save money by going solar with your neighbors. You can also download our free Go Solar Guide to learn more.