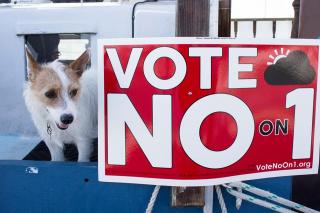 Solar supporters in Florida scored a major victory this November by defeating utility-backed Amendment 1. The ballot initiative would have paved the way for Florida utilities to dismantle net metering for solar customers. This would have severely stunted the state’s distributed roof top solar market.

The ballot initiative garnered 52% of the vote, leaving it short of the 60% needed for passage. At the outset, this solar victory looked like a long shot. An August poll had support for the Amendment above 80%. In the end, solar won the day by engaging an ideologically diverse group that put the Amendment’s utility backers on the defensive.

Florida’s investor-owned utilities conceived of Amendment 1 as a way to block a citizen-led ballot initiative effort aimed at allowing third party sales of electricity.  The grassroots effort failed to get enough signatures to make the 2016 ballot, while the utility-backed initiative succeeded. Amendment 1 used deceptive language to trick voters into thinking that a vote in favor was a vote for solar.

“One of the most important things you can do when running a large cooperative organization of many different ideologies is to respect each other’s beliefs,” said Tory Perfetti of Floridians for Solar Choice. Perfetti said the coalition focused on an issue that all groups could agree on, the defeat of Amendment 1, and did not pressure coalition members to take positions they were not comfortable with elsewhere. Perfetti comes to the fight for solar from the Tea Party movement.

This group was managed through a weekly allies table call with the leadership of the participating groups. The calls were used to share information, coordinate action, and brainstorm tactics.

“We were all about empowering others.” said Susan Glickman of the Southern Alliance for Clean Energy. Glickman added that the group developed shareable materials, a weekly newsletter and held weekly calls with ‘super volunteers’ to keep them updated on the campaign’s progress.  “Each organization deployed its own email list and reached out to their members,” Glickman said.

FL SUN co-op members were instrumental in our grassroots effort to spread the Vote No on 1 message. “Through weekly co-op updates, we were able to keep our members informed of the progress and provide messaging they could share with their friends and neighbors. It was a powerful visual to see a solar homeowner display a Vote No on 1 sign directly underneath their solar system.” said Angela DeMonbreun, FL SUN Program Director.

No on 1 relied upon existing campaigns that were supportive of solar to carry the group’s literature. They also worked with local political organizations to appear on the slate cards that campaigns left on doors or sent in the mail to likely voters as a way to educate them about down-ballot races.

Florida utilities spent an estimated $27 million on the campaign and funneled money through allied organizations to back Amendment 1. Solar supporters had no war chest, but they did not let this deter them.

“We ran the No on 1 campaign in the textbook grassroots style of politics from the olden golden days,” Perfetti said. He stressed the value of face-to-face contact and using volunteers to do voter education at public events.

A key tactic was reaching out early and often to the state’s newspaper editorial boards. The campaign garnered 42 separate editorials from 27 different outlets around the state. This success was vital to educate the public about the real purpose of the Amendment. Deirdre Macnab of the League of Women Voters said the group worked to make personal contact and meet with every editorial board in the state to explain their position on the Amendment and urge the papers to editorialize against it.

Solar supporters also capitalized on leaked audio from an industry conference that came to light in early October. Investigative journalists recorded Sal Nuzzo, a Vice President at a utility-funded think tank, explaining that the utilities’ reason for pushing Amendment 1 was as a way to slow solar. Nuzzo’s comments led to a wave of negative press for the pro-amendment side.

The campaign was able to turn this news coverage into sharable content on social media. In addition to sharing stories and links, it also created a suite of videos and graphics designed for campaign supporters to share with friends and family. “It was all about making it easy for people,” Glickman said.

“You could feel a shift at six weeks out,” said Scott Thomasson of Vote Solar. “That’s when you saw the bottom drop out in the polling numbers, that’s when people on the street, or people and parties, would go: ‘that’s a trick you aren’t supposed to vote for it’.

A key lesson for solar supporters was the need to start early. In Florida, considerable numbers of voters cast ballots by mail before Election Day. This led to the situation where many people voted for Amendment 1 without knowing its true impact. This turned into a silver lining, as many of those folks became the ‘No on 1’ campaign’s best advocates. “If you’re happy with a product you’ll tell a few people about it,” Glickman said. If you are unhappy with it, you’ll tell everyone.”

This demonstrates that solar is popular across the political spectrum. Measures designed to trick people into voting against their own interests can be exposed and beaten.

Another lesson was the importance of message discipline. “Everyone was beating the same drum,” said Aliki Moncrief of Florida Conservation Voters. “Whether it was in the newspaper or on social media, or at the polls. People were getting the same message.” Moncrief said the group’s polling and research told them the most effective persuasion message was to call out the utility-backed Amendment’s bait and switch. This was hammered throughout the campaign’s messaging. The revelation from the leaked recording validated and further fueled the effectiveness of the message.

Solar advocates leaned strongly on the de-centralized nature of the organization. Each participating group was able to effectively mobilize their base to act in concert.

“It was a true grassroots effort that delivered success because of the broad range of groups,” Macnab said. “If people in other states are invested in doing something similar, we are happy to share our knowledge.”