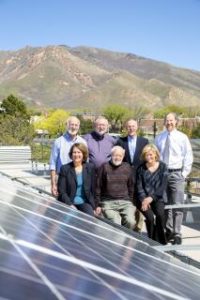 In late 2013, the University of Utah became interested in establishing a university campaign, which it called U Community Solar, to provide solar power specifically for the campus community. The U Community Solar program was officially launched on Earth Day, 2014, and ended this past October. The program offered a significant upfront discount on the price of a typical installation for participants. Program members were also able to take advantage of a 25% Utah State tax incentive (with a cap of $2000), as well as the 30% Federal tax incentive. Ultimately, 380 homeowners made the commitment to purchase systems. Combined, they installed a 1.8 megawatts of electricity. Creative Energies and Gardner Energy were selected as the installers. Community Power Network has been involved in a similar discount solar arrangement for professors, staff and others at the University of Maryland through its MD-SUN program.

“The advantage of the model is that it makes going solar easy for individuals who are interested in going solar, but don’t know where to start,” said Kate Bowman, Solar Program Coordinator for the UCE. “Utah Clean Energy and the Steering Committee do the heavy lifting upfront to offer a streamlined and simplified installation process. Participants have access to reliable information about solar from a trusted partner every step of the way, and the installer and the solar panels and inverters have been vetted by a Steering Committee of their peers. At times, we have had so many people enroll at one time that there has been a delay to connect every individual with the installer.” The University of Utah’s Steering Committee consisted of volunteer staff chosen on the basis of their knowledge of solar and solar programs, and who belong to a variety of relevant departments, such as Purchasing, Space Planning, Facilities Management, etc.

In 2014, the University of Utah student association chose to support U Community Solar. Their budget, which had previously gone to purchasing Renewable Energy Certificates (RECs), was used to help fund the program. The students requested that participants in U Community Solar contribute their RECs to the University for the warrantied lifetime of the panels (25 years) as a gesture of appreciation to the university for providing the program. The university could then aggregate the collective output from all solar installations for the purpose of registering the RECs.

Ms. Bowman believes other campuses can adopt this solar program. “This model can certainly be replicated elsewhere, and has been by several local community organizations throughout Utah. Community solar programs are also very scalable, and can be replicated in a small community supported entirely as a volunteer effort or, as we’ve shown through U Community Solar, expanded to have a wide impact throughout a broad geographic area. Good community partners are key to a successful outreach effort, and the University of Utah has shown that colleges and universities can choose to spur solar development not only on their campuses, but also in the surrounding neighborhoods and throughout their campus communities.”

If readers in the CPN Network know about other innovative renewable energy partnerships with universities, we would love to hear from you.