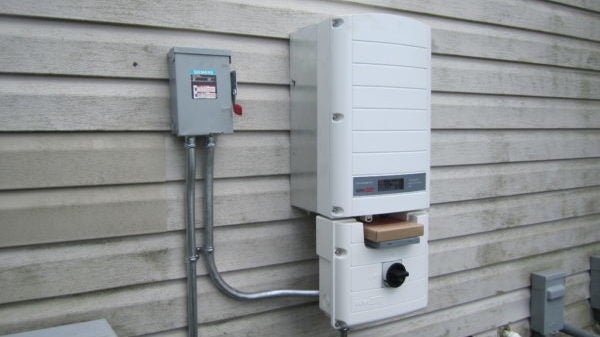 A solar photovoltaic (PV) system is just that, a system. There are several components that are needed to convert the sun’s energy into electricity to help you save money on your electricity bill. One key component in the system is an inverter. Inverters change direct current (DC) electricity produced by your modules into alternating current (AC) so it can be used by your home’s electric devices.

To understand the process, a quick refresher on how solar modules convert sunlight to electricity is necessary. Photons from the sun hit electrons in solar modules. This interaction creates direct current. Your home and appliances use alternating current. So, an inverter is needed to ensure the DC electricity generated by your modules is turned into usable AC by your home.

There are two types of inverters: central (also called string) inverters and micro-inverters. Regardless of type, all modern inverters use a technology called maximum point power tracking (MPPT) to optimize the amount of energy harvested from solar modules. Inverters achieve this by regularly ensuring the modules are producing the optimal combination of voltage and current. This combination fluctuates based on the current conditions on site. Central inverters have one (sometimes two) MPPT controllers. Each micro-inverter has its own MPPT controller.

Central inverters (from companies like SMA, Fronius, ABB and others) receive all of the energy generated by multiple modules and convert it to alternating current in one central location. These inverters are usually located at ground level, near the main electrical service panel with wires connecting to the modules. Central inverters optimize energy conversion for the entire system. Because multiple modules are controlled by one MPPT controller in the inverter, shading or other factors affecting one or more modules bring down the performance of the whole system.

Micro-inverters (from companies like Enphase, SMA, ABB and others) are smaller inverters connected to each module. Each micro-inverter has its own MPPT controller and converts DC into AC electricity at the point of the module itself.

What about AC modules?

AC Modules are a combination of a solar module plus a micro-inverter except that they are combined at the factory and tested together. This means they are treated slightly differently by the National Electric Code rules. However, in terms of comparing the strengths and weaknesses described in this article, you can consider them an equivalent to micro-inverter technology.

What are DC optimizers?

Another technology known as DC optimizers (from companies like SolarEdge and Tigo) also involves having one small device installed with each module, each with its own MPPT controller. Optimizers don’t convert energy from DC to AC like micro-inverters though. Instead, they complement a central inverter by optimizing the DC energy produced by each module so that the central inverter can convert it more efficiently to AC energy. This option is becoming more common and offers similar benefits to those of micro-inverters.

Broadly, if you are using high-quality modules and have a completely unobstructed roof, you may be financially better off with a central inverter. If there are conditions on site like partial shading or multiple roof angles where your modules will be installed, micro-inverters, AC modules or DC optimizers may be a wise investment.

Like any component of your solar system, the ultimate decision on which inverter to choose will be based on your site characteristics, budget and system expectations and goals. A reputable installer will be happy to walk you through the advantages and disadvantages of your inverter options.