This spring, Hawaii enacted the “Ratepayer Protection Act”. This law aims to benefit consumers by changing the way electric utilities make money. In the current business model, they typically make their money in one of two ways. They generate revenue from selling electricity to customers and they receive money from these same ratepayers for building infrastructure such as transmission lines and transformers.

Hawaii’s new law sets forth a new model that ties utility compensation to meeting a set of proscribed service metrics. This is called performance-based ratemaking. The adoption of performance-based ratemaking across the country could increase our ability to take control of where our electricity comes from with technologies like solar. It could also force utilities to provide better services to their customers.

Currently, utilities are incentivized to sell as much electricity and build as much infrastructure as possible. These goals are at odds with the interests of utility customers who want to save money and lessen their bills by using less electricity and by going solar. Performance-based ratemaking aims to fix this imbalance by restructuring the way utilities make their money.

One example of a performance metric that Liittell described is compensating a utility based upon how good of a job the utility does at promptly interconnecting rooftop solar systems. Other new performance metrics include electric service reliability and the inclusion of more energy efficiency.

“[Performance-based ratemaking] ends up being a way to find a win-win for many different players in the electricity economy, said Sonia Aggarwal of America’s Power Plan. “What we’re looking for is a way for utilities to remain financially viable and do well if they facilitate a system that supports all the different kinds of energy technologies that customers want.”

Making this transition is easier said than done.

Utilities are limited in what they can charge customers by commissions appointed by governors or elected by voters. These commissions set the rate utilities can charge for the electricity they sell. They also set the rate of return the utility receives for building infrastructure. For example, if a utility estimates that a new transmission line will cost $10 million dollars, it can pass that cost along to customers through their monthly electric bill. It is also allowed to add a cost a certain percentage more, often as high as 12%. This gives utilities a guaranteed rate of return.

In theory, these commissions are supposed to act in the interest of ratepayers. In practice, it’s more complicated. This system has been profitable for monopoly utilities, and the commissions follow the existing laws and rules on the books. Change is hard and slow.

The traditional utility model has made utilities some of the biggest players in politics. From 1989 to the present, electric utilities have given nearly half a billion dollars in campaign contributions to federal, state, and local candidates and committees through out the country.1 This largesse has given utilities a great deal of influence over the agencies that are supposed to regulate them and makes legislative reform efforts very rare.

“Empirical evidence shows [utilities] don’t think there’s much reason to change,” Littell said. He cited efforts by utilities across the country to gut net metering while imposing additional charges on solar as a prime example of this. 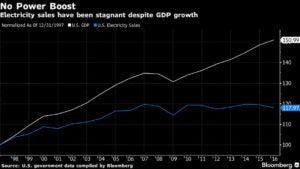 In the face of this inertia, advocates for a more fair system do have some bright spots to point to.

Utilities used to be able to rely on steady growth in electricity demand. This is no longer the case. The growing deployment of energy efficiency, as well as greater demand for distributed alternative energy sources like rooftop solar, means that utilities are unable to count on an ever-increasing demand for electricity. If it doesn’t make things worse, it may make them more amenable to reconsidering their role in the market.

This presents an opportunity for solar supporters to make their voices heard.

“Commissions are not all that used to dealing with the public,” Littell said. “They’re comfortable dealing with utilities and lawyers and lobbyists.” He suggests writing personalized letters to commissioners and attending public hearings as effective ways to get their attention. These forums are our opportunity to force utilities to give us an electric system that maximizes rooftop solar and figures out how to integrate it fairly so the savings from solar are shared throughout the community.