Matt Weaver has spent a decade working on renewable energy, hydrogen and solar. He approached MD SUN for help to start a solar co-op in Baltimore City.  “I was very impressed by the track record of MD SUN and the success of the Baltimore Interfaith Solar Co-op, which MD SUN organized,”, Weaver said, referring to the co-op MD SUN organized in partnership with Interfaith Power & Light in 2015. “I want to bring the opportunity of going solar to more Baltimore residents and meet more people interested in working on solar in Baltimore,” Weaver said. 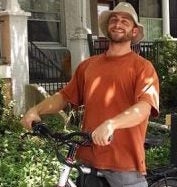 “My primary motivator is to reduce the suffering brought by the ever increasing BGE and Exelon electric bills.” This led Matt to contact MD SUN about starting up a co-op for himself and for his community. “I want to help families reduce their future utility expenditure and enjoy cleaner air in Baltimore City.”

“Maryland just passed a veto-proof fracking ban and we must strike while the iron is hot and transition to renewables,” Weaver said. “Going solar is one way to push back on burning sources like coal and trash in Baltimore City.”

Weaver noted that groups like United Workers’, Free Your Voice and the students at Benjamin Franklin High School in Curtis Bay who recently helped shut down plans for a new trash incinerator in the Curtis Bay neighborhood are working to wean Baltimore off these energy sources. Increasing distributed renewables like solar is an important part of this transition he says. Forming a solar co-op is one way to bring a community together around a common need. “The Waverly Farmer’s Market and the interest from the community have been integral to setting up the solar co-op.” Weaver said. In April of this year the Baltimore Solar Co-op launched through his efforts and is currently seeking members.

The group is open to any homeowner in Baltimore City or Baltimore County. Signing up is not a commitment to go solar but just to indicate active interest to install solar. Once the group gets to critical mass MD SUN will solicit bids from area installers on behalf of the group. Learn more about the Baltimore Solar Co-op and join the group at the co-op webpage.