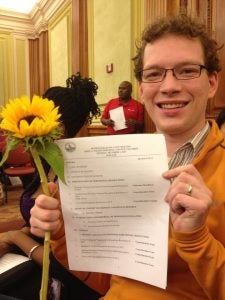 D.C. is now, at last, open to community solar. This good news comes as a result of the Public Service Commission (PSC) issuing final rules for the credit rate community solar customers receive for the electricity generated from these projects. Importantly, these rules ensure community solar participants will receive the same credit for community solar that they would if the solar were on their own roof. Community solar gives people access to solar if they are unable to do so on their own homes. This may be because their roof wouldn’t support it, they were a renter, or they lived in multi-unit buildings.

It has been a long trek to get community solar in D.C. It began in 2011 when community groups and DC SUN worked hard to build the infrastructure for community solar legislation. We convened stakeholders from the low-income housing community, solar community, civic groups, Pepco, and the D.C. government. The Community Renewables Energy Act (CREA) was introduced in 2012 and passed in 2013. This legislation allowed renters, tenants of apartment buildings, and others access to virtual net metering. This enables them to participate in community solar projects.

The rate credit set by the PSC for community solar only included the generation and transmission costs of electricity. This leaves out distribution taxes and other charges we incur when we purchase electricity. Under these rules, community solar participants would have been credited 9¢/kWh compared to the 14¢/kWh that rooftop solar customers receive. This new credit now includes all four of these elements.

Community groups and DC SUN worked to fix the issue. We successfully argued the PSC’s rules violated the spirit of CREA because it limited who could benefit from solar. In June of 2016, the D.C. Council passed a bill instructing the PSC to restore the full credit rate for residential customers.

These new rules will not impact residential rooftop solar as regular net metering covers this type of solar. We expect new community solar projects to roll out across the city quickly. DC SUN will be here to help people across the District take advantage of this opportunity to advance solar access for all.