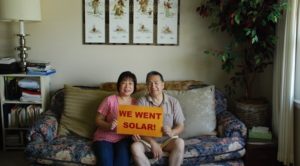 Community solar makes the benefits of solar — lower electricity bills, improved community health, and economic development, to name a few — available to those unable to go solar today. Whether their roof is shaded, or if they live in an apartment or condo and don’t own their own roof, Maryland’s community solar pilot program will allow them to subscribe to a community solar project and experience the energy freedom enjoyed by solar homeowners.

This article will try to answer some of the frequent questions people have about community solar before providing an update on two important ongoing battles that will impact the future of community solar in Montgomery and Anne Arundel counties.

The basics and why it’s important for Maryland

There’s often some confusion about what is and isn’t community solar. When we say community solar, we don’t mean large scale solar farms stretching as far as the eye can see. Those large facilities to take up hundreds of acres each and have to go through a special approval process with the Public Service Commission. We mean small-scale solar projects —generating 2 MW or less on under 12 acres of land—that must be developed in your utility service area and are directly connected to the same electricity system you use every day. That means if you currently buy your electricity from BGE, for instance, you are only eligible to subscribe to a community solar project within the BGE service area. The same thing goes for Pepco, Potomac Edison, and Delmarva, all of which are participating in the community solar program.

Community solar offers several benefits to Marylanders and their communities around the state. In addition to bringing greater equity to the solar market by expanding who can directly benefit from solar energy, community solar helps Maryland be more energy independent. Instead of importing dirty fuel into our state, community solar helps us create good jobs and clean energy right in our own communities. Community solar also allows Maryland to protect our natural resources, preserve clean air and water, and do our part to stave off climate change. In fact, properly managed solar systems are good for local agriculture and wildlife.

Where can community solar projects be built?

Projects can be sized and built to meet demand given the constraints of their location. Large rooftops, parking lost structures, and farm land are all ideal for community solar—if the local zoning rules allow it (more on that later!).

Rooftops can be ideal for community solar projects because they require no additional construction and don’t conflict with alternative land use interests. Also, the difficulties of interconnecting the new solar system can be smoothed because the building is already connected to the grid, though there can be some issues that arise depending on the specific building’s existing circuit capacity and electrical infrastructure. However, rooftops tend to have relatively little available area for solar systems, which can increase costs and limit the number of subscribers who can benefit.

Similar to rooftops, parking structures can offer many advantages for community solar projects, in that they are generally located in areas that offer relatively easy interconnection and no competing land use interests. However, they also have similar downsides—including limited space and often require more additional construction for the solar installation, often increasing the relative cost.

Farmland may not seem like the ideal location for a community solar project, but it presents many advantages. Costs are low, since there’s no need to prepare the land, no trees to take down, no underling structures that need to be reinforced, and there is plenty of space to maximize project size. And, community solar projects can bring additional revenue to farmers while adding value to their agriculture by embracing pollinator-friendly habitat and design principles—a practice encouraged in Maryland law. Farmers can choose to host community solar on less productive land while continuing to farm on agricultural soils.

However, some farmland is located too far from electrical lines to make the projects economically viable. And many jurisdictions have zoning laws that prevent solar facilities from being installed on farm land.

Prime examples of local zoning slowing the implementation of the community solar pilot program can be found in Montgomery and Anne Arundel counties. That’s why we’ve been working with solar supporters in both counties to make sure local rules don’t keep their neighbors from enjoying the benefits of community solar.

In Montgomery County, several members of our network of solar supporters in the area participated in a public work session with members of the County Council on Monday, April 30. The meeting was an opportunity for the Council to receive recommendations and input from stakeholders, and to ask questions about the potential impact of Zoning Text Amendment (ZTA) 18-01, which will streamline local zoning to allow community solar. More than 200 Montgomery County residents have signed our petition asking the Council to consider including a provision opening a limited portion of the county’s Agricultural Reserve to pollinator-friendly community solar projects to better serve the community.

Throughout the month of May, there will be a series of public and private meetings aimed at supporting dialogue and furthering education on the issue of community solar in the county, including a public solar forum on Wednesday, May 23 from 6 – 8 pm at Southern Middle School Cafeteria (5235 Solomons Island Rd, Lothian, Maryland). We hope Anne Arundel County solar supporters can join us at the event to make their voices heard!

The final vote on the solar recommendation is expected to come at a public meeting of the full Agritourism Commission in June. We’ll let our supporters know when the meeting date and time are set so we can show up and support community solar!