CPN project DC Solar United Neighborhoods was recently featured in the Washington Post! Check out the recent article on their neighborhood bulk purchase programs and check out our resource page for information on starting a bulk purchase group in your own community.

D.C. SUN IS A GROUP APPROACH TO RENEWABLE ENERGY

Since beginning seven years ago, D.C. Solar United Neighborhoods has brought photovoltaic power to 115 households, with hundreds more poised to join. The program has expanded to all eight wards and established affiliates in Maryland, Virginia and West Virginia. DC SUN is about to begin a group installation in Ward 3, and has just completed a second round in its original neighborhood, Mount Pleasant.
It all “started as an accident,” said Executive Director Anya Schoolman. 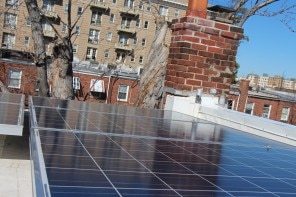 The impetus came from Schoolman’s son, then 12 and now in college. He and a friend saw “An Inconvenient Truth,” the documentary that presented Al Gore’s view of global warming. “They came back and said, ‘We should do something. We should go solar,’ ” Schoolman recalled.
But in 2006, she discovered, “It was really expensive and really confusing.”

“We called all the installers we could find. Only three showed up. The three told us totally contradictory stories. None of them had ever done a flat roof. They’d only worked in the suburbs.”
Her son and his friend “made up this flier that said ‘the Mount Pleasant Solar Co-op.’ At the end of two weeks, we had 50 households signed up. And we had no idea what we were going to do.”

The Mount Pleasant residents found they had to change the law before they could proceed. They pushed the D.C. government to establish solar renewable energy credits and a grant program to pay for solar installation. (The latter ended in 2012.) Add federal tax incentives, Schoolman estimated, and most D.C. residents will pay back their solar-installation costs in three to five years.

The other thing that saves money is group purchasing. Since the initial Mount Pleasant program, each DC SUN installation has been organized around a co-op, usually defined by neighborhood.

Twenty to 30 percent of a solar installation company’s costs are advertising, marketing and customer acquisition,” said Ross Margulies, a D.C. lawyer who last year helped organize a 50-household Ward 4 co-op, centered on Petworth. “If you can bring the customers to the solar company, then you can get a pretty steep discount on the costs of installation.”

DC SUN began as a volunteer organization and still largely is. Schoolman said that she and program director https://www.solarunitedneighbors.org/wp-content/uploads/2021/05/nancy-HOA-1.jpg “kind of lend time to DC SUN” while working for Community Power Network, a national nonprofit group that promotes renewable energy projects.

The organization recently hired its first paid coordinator, who is paid through a newly instituted $500 fee per signed contract. That’s paid by the installer, not the homeowner, Schoolman said.

DC SUN has no long-term agreements with particular installers; companies are chosen by the individual co-op. In Petworth, the participants selected a neighborhood firm. For a second Mount Pleasant group installation that recently closed, the co-op opted for an installer that offered American-made equipment.

We’re a highly decentralized, hyper-democratic organization,” Schoolman said. “Sometimes new co-ops form and they do whatever they want. Some of them focus on a broad range of issues, and some of them just focus on solar. But in terms of these bulk purchases, we’ve now got that down to kind of a science.”

Each group-installation project has a closing date, because “we discovered that you have to have a deadline. Or people don’t act.”

DC SUN is organizing a Ward 3 buy that closes this week. Projects in College Park and Hyattsville have cut-off dates in June.

The neighborhood focus has several advantages, including the convenience of nearby meetings. But DC SUN also organized a region-wide project in concert with the World Wildlife Fund, and has sometimes allowed people to join buys outside their neighborhood, with the consent of the local group.

Margulies, whose system began operation in January, admitted that he hasn’t benefited from much sunlight so far. But, he said, “in the summer, I suspect that I’ll be generating most of my electricity needs.”

In the Washington area, he noted, solar electricity isn’t yet financially viable without tax credits or other incentives. But “if solar makes sense for you, not doing a group purchase with DC SUN doesn’t make any sense to me,” he said. “From both an economics and a community-oriented perspective, it’s a fantastic program.”