On Saturday, February 9, dozens of solar homeowners and supporters from around the District joined together at Matthews Memorial Baptist Church in SE D.C. for the 2019 D.C. Solar Celebration. Matthews Memorial was the perfect host for the event, with its sprawling 183 kW array of solar panels installed in 2017 covering its expansive roof.

The event was an opportunity to reflect on the solar successes of the past year in the District—and the continuing implementation of the 51st State Solar Co-op. D.C. Program Director Yesenia Rivera opened the event by highlight the successes of this District-wide co-op, currently accepting participants for this third and final round, and describing what’s ahead for the next year in our D.C. program. 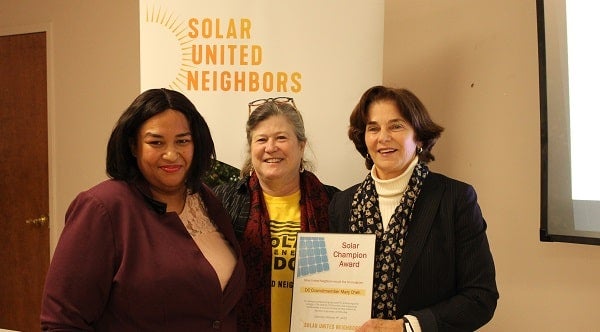 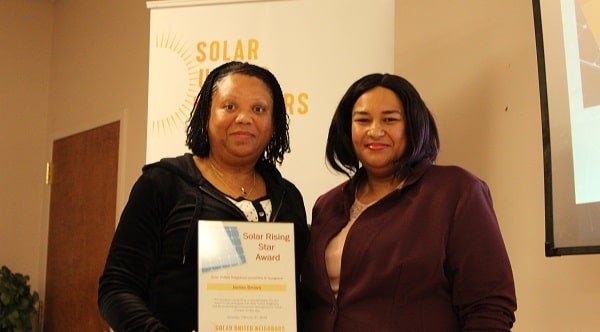 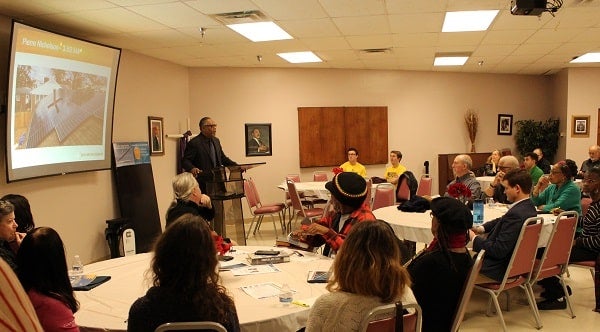 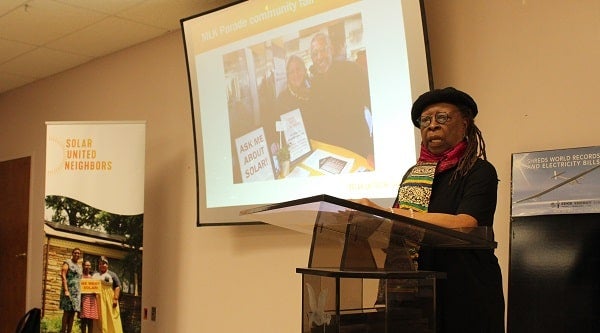 The 51st State Solar Co-op is a project funded by Solar for All, a program of the District of Columbia’s Department of Energy and Environment that seeks to provide the benefits of solar electricity to 100,000 low-income households and reduce their energy bills by 50% by 2032. The program, which was established by the Renewable Portfolio Standard (RPS) Expansion Amendment Act of 2016, is funded by the Renewable Energy Development Fund (REDF). For more information about Solar for All visit: http://doee.dc.gov/solarforall. The first Solar for All funded solar system was installed through the co-op in November.

In addition to bringing together D.C.’s community of solar supporters, the Solar Celebration provided an opportunity to recognize solar champions for their work and support for solar. The Awardees included D.C. Councilmember Mary Cheh, Chairperson of the Committee on Transportation and the Environment and driving force behind the Clean Energy DC law which will ensure that the District is powered by 100% clean electricity by 2031; Solar for All recipients LaToya Smith and Jackie Brown; Ron Bethea, President and Founder of Positive Change Purchasing Co-op LLC and a host of a podcast focused on expanding the access of rooftop solar into marginalized communities and a just transition for our energy workforce; and Sherill Berger, a longtime solar champion in D.C. and member of our D.C. Advisory Board. DOEE’s Make Matthews and Ted Trabue, Managing Director at the District of Columbia Sustainable Energy Utility both also spoke at the event.

Thank you to everyone who joined us on a sunny Saturday to celebrate the power of solar energy in the District and thank you to all the speakers and awardees who make the D.C. solar movement go. Thank you to our partners at Groundswell and DMV Interfaith Power & Light for joining us to share information about their offerings at the event. And thank you to Matthews Memorial Baptist Church for offering your solar-powered building to host our event—and for providing a delicious food and drinks for the occasion!