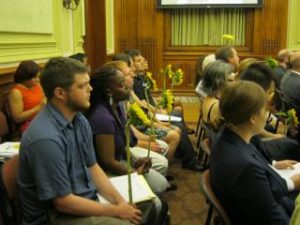 A sticking point had been the credit rate that community solar subscribers would receive. Net metered solar customers receive a credit of roughly 13 cents per kilowatt-hour. D.C.’s Public Service Commission set a rate for community solar that is roughly half that value.

This stalled the implementation of community solar projects, as developers were hesitant to create projects that were undervalued. The D.C. Council is passing legislation to fix this credit rate issue – at least for residential customers.

Pepco has finally set up a webpage to explain the process and provide forms for registering community solar projects. These projects officially called community renewable energy facilities (CREFs). CREFs must be registered in order to take part in community solar.