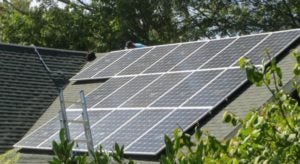 “Price per watt” is the way installers price solar systems. As the name implies, this is the price you will pay for each watt of electricity your system is rated to produce. Each solar panel comes with a wattage rating. This rating is the amount of DC (direct current) power the panel produces under test conditions. So, a panel rated at 300 watts produces that much power output.

When comparing different installers’ proposals, it is important to make sure you are making an apples-to-apples comparison. The price per watt should include the gross cost of the system. This includes all system components such as racking, inverters, etc. It should also include the installation and permitting costs as well. The gross cost does not include the 30% federal tax credit.

*Note: Systems are more commonly measured in kilowatts. One kilowatt equals 1,000 watts, so the above example refers to a 3-kilowatt system.