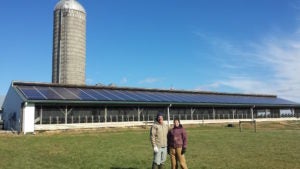 The Kent Conservation and Preservation Alliance (KCPA) held a public information session in Chestertown this past December to discuss the potential impact of utility scale solar on Kent County agricultural land. Of particular concern to the organization are the 60 MW Mills Branch Solar array being developed by Apex Clean Energy off of MD Route 290 and a 75 MW array planned near Chestertown. During the presentation Janet Christensen Lewis, president of KCPA, laid out their position.

KCPA is a formal intervenor in the Mills Brach Solar array application process. The project’s developer will need approval from the Maryland Public Service Commission in order to build the array. Despite opposition from KCPA, as well as Kent County Commissioners and others, the Public Service Commission has the authority under current state law to preempt local zoning ordinances that would prevent the facility from being sited on agricultural land.

KCPA and fellow presenter Nicholas Redding of Preservation Maryland believe all forms of development should be held to the same standards and regulations. They argue local governments should have ultimate review and approval authority for commercial and utility-scale dispersed energy resources like solar and wind.

Organizations like KCPA are also worried that large scale solar projects which occupy prime agricultural land will lead to something called fragmentation. They argue that fragmentation of prime farmland through energy sprawl is harmful because of the loss of integrity in the fabric of agricultural properties devalues cultural resources. This degrades the agricultural economy and damages tourism potential. Rather than building on prime agricultural land, they say, large-scale solar should be sited in zones specifically designated for such use. This would be industrial areas, commercial zones, brown fields, parking lots, and rooftops.

Both KCPA and Preservation Maryland presenters made it clear that they are in full support of Maryland’s transition to a renewable energy economy when done in the context of local planning decisions. KCPA pointed to successful distributed energy projects like the nearby solar array installed on a barn structure at St. Brigid’s farm in Kennedyville as one way to expand locally beneficial, renewable energy throughout the county. The 78kW array belongs to Judy Gifford and Bob Fry who went solar as part of the Chestertown Solar Co-op of 2015.