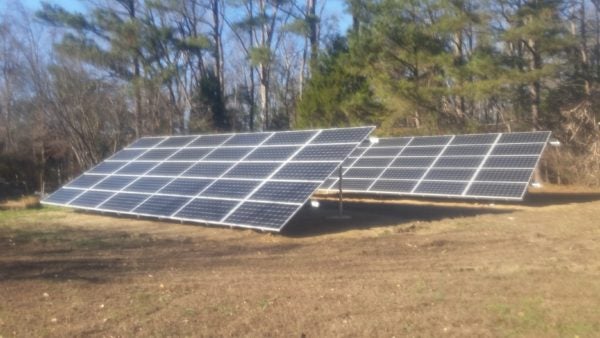 The growth in the solar market has led to a number of ways for homeowners to go solar. For the technically savvy, there is the option of building a system yourself. This is just what Smithfield resident Tim Lavallee did. Tim put his engineering background and do it yourself spirit to work by designing and constructing a solar system on his property.

Tim received site and electrical permits in August and began researching DIY solar options. This gave him a sense for what he wanted for his system. Tim constructed the system over a period of two months, working one or two days a week. He worked with an electrician to ensure that he did the wiring correctly and a contractor to dig the footers.

Ultimately, Tim installed a 19.8 kW ground-mount grid-tie system with 60 Suniva OPT-330 modules, two Solaredge 10kW inverters, and Ironridge ground-mounting. The system has wireless power monitoring down to the module level. The two 30-panel arrays are both 15 by 40 feet and face south to maximize solar exposure.

Even for an accomplished DIYer, Tim found the process challenging. This was especially true, Tim said, when it came to ordering equipment that he did not have experience working with. Most of the materials were shipped from out of state, the piping was sourced locally, and the miscellaneous items were purchased at the local hardware store.

“I’m a pretty good do it yourselfer,” Tim said. “It was a little nerve-racking even for me. It’s not for the weak of heart…here comes an 18-wheeler with a bunch of stuff. I hope it works.”

Tim says that to his knowledge the system is the largest residential array in the state, clocking in at 19.8 kW. The total cost was about $40,000 out of pocket, and $28,000 with the 30% tax credit. The system is currently set up for Net Metering – with the option to go to the Solar Purchasing Program. He estimates it will take about seven years for him to recover the cost of the system.

“With the the cost savings, the environmental stewardship, and the bragging rights…” Tim said, “It was totally worth it.”