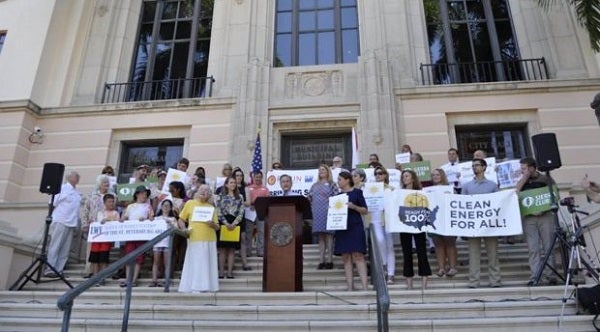 A key piece of putting sunshine to work in the Sunshine State is a local government that works with homeowners, not against them. Solar friendly municipalities in Miami are not only streamlining their permitting process (working with organizations such as the Solar Foundation and the SolSmart program) they’re passing resolutions in support of solar co-ops – making their facilities available for information sessions and even engaging commissioners to help organize and spread the word. It’s a great feeling, knowing that elected representatives are promoting affordable, renewable energy. Many municipalities take their commitment one step further by passing ordinances that waive permitting fees and expedite permits for rooftop solar.

In Miami-Dade County, four municipalities have waived permitting fees: Miami Beach, Coral Gables, the City of Miami, and South Miami. Miami Shores is having a second reading of its resolution to waive permitting fees on September 19. The Miami Shores Resolution was presented to the council by a homeowner wishing to see her village make it easier for a homeowner to go solar. And it worked.

As co-ops near their launch date, several more municipalities are considering adopting similar resolutions and ordinances.

Solar friendly municipalities understand that by the time a home goes solar, the homeowner has already made significant upgrades to their house. This could include impact windows, new roofs, energy efficient air conditioning and pool pumps. These municipalities see waiving the solar permit fees as a measure of good faith to the community that they too, believe in the importance of resilience and renewable energy.

If a co-op is headed your way, one of the best things you can do in preparation is to approach your municipal leaders and ask them to support the endeavor via in-kind resolutions. Ordinances to waive solar permitting fees benefit all homeowners wishing to go solar – whether through a co-op or not.

Each of us has the power to bring about change for the better. Reducing financial barriers, as well as improving the permitting process so permits are reviewed and approved in a timely manner make a difference to both homeowners and installers.

If you are interested in getting involved and improving solar access in your community, consider presenting similar proposals to your local leadership.

Examples of resolutions and ordinances