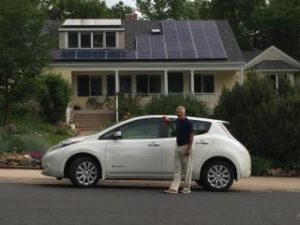 Electric vehicles and solar panels are similar in many ways. They are emerging technologies eager to expand market share. They offer the promise of future savings through decreased fuel use, but this promise comes at an initial premium for both. This is why both electric vehicles and solar make compelling products for a group purchase. Boulder County, Colorado is now on its second round of just that, a combined electric vehicle and solar bulk purchase program.
The effort was born from a study that the Southwest Energy Efficiency Project (SWEEP) conducted for Boulder County. The study examined steps the county could take to help the transition to electric vehicles. The county worked with SWEEP, as well as with Vote Solar, which had experience with solar bulk purchases.

The partners started with an RFP process for both solar and electric vehicles. The RFP called for selecting one installer for the solar component of the program. Partners were open to having multiple electric vehicle manufacturers, but asked for one dealer per manufacturer. The selection committee was made up of representatives from SWEEP, Boulder County, and Vote Solar. The committee reviewed the bids based upon price and customer service.

“Its an interesting RFP process because there is no exchange of money between the respondent and the sponsoring organization,” said Will Toor of SWEEP. “The way that it was structured, in some sense, it isn’t really a group. The county negotiated a discount open to anyone who lived in the county during the time duration.”

The program was opened to the public after the installer and dealer were selected. Participants had the option of going solar, purchasing a Nissan Leaf (the make and model the selection committee chose), or both. Electric vehicle chargers were not included as part of the discount. Some of the vehicle purchasers already had solar. About one in six participants bought a vehicle and went solar. Of this group, two thirds opted for solar systems that could cover their home’s entire generation needs as well as the needs of their vehicle.

Program participants signed contracts with the solar provider and the dealership. The program sponsors acted as a go-between. The program initially ran from the end of August through October of 2015. The response to the program was so high that participation was held open through December.

The price of the electric vehicles was based upon discounts from the manufacturer as well as from the dealer. The purchase group was able to secure discounts totaling $8,700 below the manufacturer’s suggested retail price. Toor notes that a motivated buyer, one who shops around and compares prices between dealers, can often get significant discounts. He estimates the group was able to save participants between $750 and $1,000 over a motivated buyer.

Similarly, the price for solar wound up being a few cents per watt better than the market rate, Toor said. The price per watt offered in the second round of the program $2.73. Toor said this is about a 20% discount off of a standard installation price for the area.

The bulk purchasing group was open to all Boulder County residents. The county teamed up with several local organizations to spread the word. These organizations included the University of Colorado and a local hospital. Municipalities in the county held open workshops for their staffs to educate them about the program.

Program participants signed up for the program through an online portal. They could indicate whether they were interested in going solar, getting an electric vehicle, or both. Participants would then be contacted within a day by the selected installer and dealership as the case may be.

Organizers made heavy use of earned media and social media to get the community excited about the program. The organizers found that as the program went on, a higher and higher percentage of their sign ups came through word of mouth.

Nationwide, 2015 was a down year for electric vehicle sales. In Colorado sales were up 10% over 2014. The bulk of these purchases came from the Denver metro area, where the bulk purchase program was located. The success of the combined electric vehicle/solar bulk purchase has led more communities to adopt the effort. In addition to Boulder engaging in a second round of the program, Salt Lake City, Utah, Fort Collins, Colorado, and Minneapolis, Minnesota have started similar efforts.

Pairing solar and electric vehicles in a bulk purchase program is not with out its challenges. Automobile pricing varies from month to month. This means the locked in price for the electric vehicle portion of the purchase will change over time.

Toor noted the importance of choosing the right dealership partner. He said the dealership salespeople to feel invested in the program, knowledgeable about electric vehicles, and have the inventory to meet an increased demand a bulk purchase program will hopefully bring.

Aside from partner selection, Toor also noted the timing factor when starting a bulk purchase program. He suggested starting in the second half of the year so that program participants can purchase at the end of the year in order to recoup federal and state tax incentives for electric vehicles and solar more quickly.