Exelon’s CEO, Chris Crane, testified yesterday before the DC Public Service Commission that Exelon considers the development and expansion of distributed solar generation to be a “threat” to Exelon’s nuclear and fossil-fueled generation business. Mr. Crane described a September 2014 Exelon Board retreat that approved a comprehensive Strategic Plan to guide the company.

According to Mr. Crane, Exelon’s Strategic Plan warned that expansion of distributed renewable generation risks creating lower demand for its conventional baseload generation and lower wholesale prices — both of which will squeeze the profit margins for Exelon’s nuclear generation plants.

“The proposed Exelon-Pepco merger is a bad deal for DC, Mr. Crane’s comments today explain why,” said Anya Schoolman, President of DC SUN. “Exelon’s takeover of Pepco presents a clear conflict of interest. Exelon’s holdings in nuclear and fossil fuel energy are at clear odds with the expressed wishes of DC residents to receive reliable, low cost energy from renewable sources like solar and wind.”

Exelon is concerned that if its utilities facilitate renewable distributed generation, it will “canabalize” Exelon’s nuclear generation business. Finally, Mr. Crane testified that Exelon considers net metering for distributed solar to be a “government subsidization” that Exelon continues to oppose, and it reserves the right to lobby for its corporate “guiding principles” before the DC Council to eliminate “community solar” in the District. Net metering ensures utility customers with solar panels receive fair compensation for the electricity they generate. Community solar allows individuals or businesses to buy their electricity from a shared solar project.

It is abundantly clear from this testimony by Exelon’s CEO that if the proposed merger is approved by the PSC, Exelon will impose its vision for protecting its commercial generation business from being “canibalized” by the growth and development of solar distributed generation in the District. Mr. Crane could identify no real benefits from the merger in terms of promoting the District’s environmental policies. Based on this testimony, the PSC has no legitimate basis for approving this proposed acquisition of Pepco.

A full transcript of DC SUN’s cross-examination can be found here, starting on page 128 (page 425 in the document). The Public Service Commission is still taking public comments on the proposed merger. You can make your voice heard here. 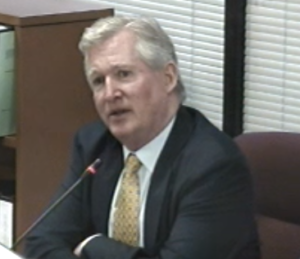